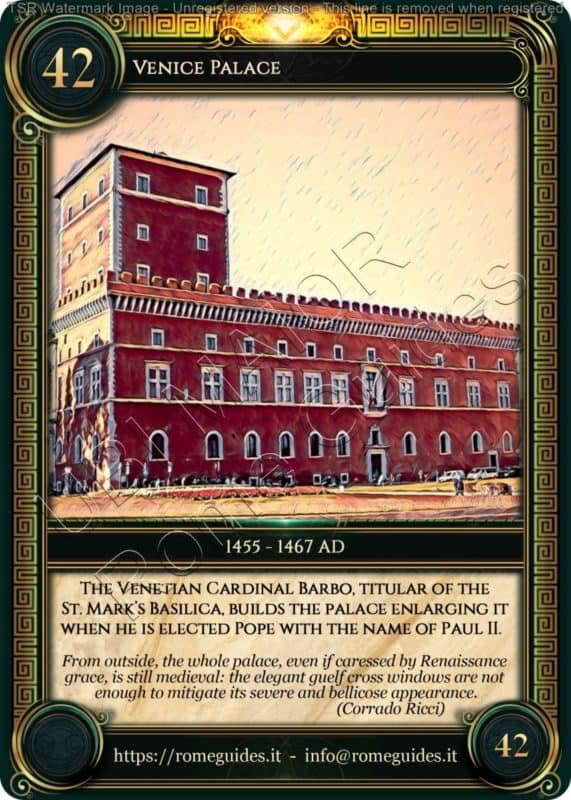 During the 15th Century, even in Rome, works of reconstruction and embellishment of buildings in Renaissance style began: one of the most important examples of this artistic renewal was the Venice Palace, whose construction began in 1455 at the behest of the Venetian cardinal Pietro Barbo, who a few years later became Pope with the name of Paul II.

The authorship of the project of the palace, which is one of the first and most important civil buildings of Renaissance Rome, is very uncertain: if for some scholars it is attributed to the great Tuscan architect Leon Battista Alberti, according to most of them the builder was Francesco Del Borgo, already active in Rome as an architect of the papal court of Nicholas V.

The modern Venice Palace is just a little different from the one originally built, because in 1909 it was necessary to plan a new arrangement for the Venice Square, due to the construction of the huge Victorian, which completely changed the atmosphere of this corner of Rome.

It was decided to demolish the Little Palace (Palazzetto Venezia), which, removed from its position at the south-eastern corner of the Palace, was rebuilt leaning against its southern facade, without making a faithful reconstruction.

The Venice Palace represented the symbolic point of transition between the Middle Ages and the Renaissance. The robust structure of the building still retained a medieval appearance, with its mighty tower and crenellated crowning, but on this more traditional basis were set the clearly Renaissance forms of the large rooms, the porticoed courtyards and the large Guelph cross windows. The spacious halls, the wide internal staircases and the elegant loggias also provided greater comfort and functionality to the palace.

The monumental porticoed courtyard was built with two orders of overlapping arches on sturdy pillars and semi-columns, representing a perfect example of classical-Renaissance taste, inspired by famous Roman monuments such as the Theatre of Marcellus and the Colosseum.