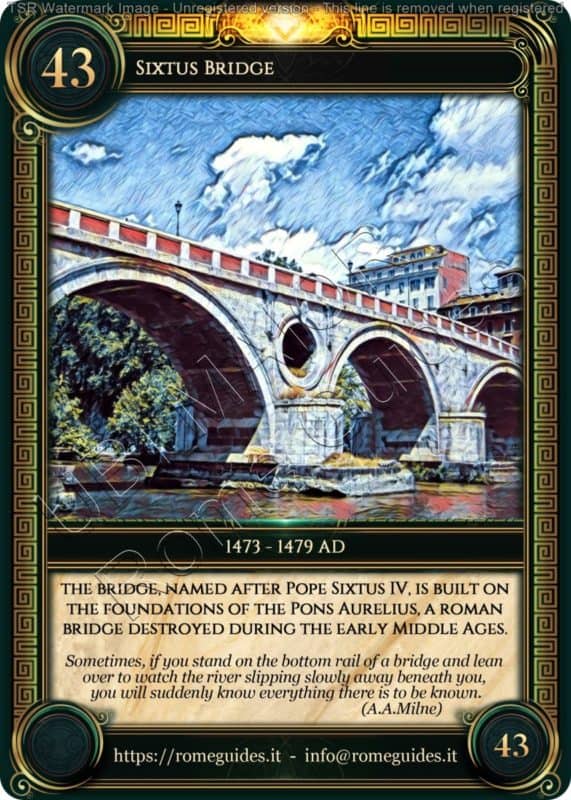 The Sixtus Bridge, the only Renaissance bridge built in Rome still existing, was actually rebuilt on the ruins of an ancient Roman bridge (Pons Aurelius), dating back to 215 AD and erected by the Emperor Caracalla. In 367 AD the Emperor Valentinian made its first major restoration, and on that occasion the bridge was adorned with a large triumphal arch decorated with bronze statues. Collapsed in 792, as a result of a flood of the Tiber river, the bridge was abandoned and therefore nicknamed “tremulous bridge“.

In 1473, in view of the Jubilee of 1475, Pope Sixtus IV commissioned the architect Baccio Pontelli to rebuild the old bridge, which from the name of the Pontiff took the name of Sixtus Bridge: before this reconstruction, to connect the two banks of the Tiber river was used a boat that ferried passengers from one side to the other.

Tradition has it that half of the money needed to carry out the work came from a bequest to the Dominicans by Cardinal Giovanni of Torrecremata, uncle of Pope Sixtus IV, and the other half from the funds obtained by the taxes imposed on the prostitutes of Rome.

The bridge, 108 meters long and 11 meters wide, consisted of four arches with a large round hole (nicknamed “occhialone“) on the central pylon, which has always functioned as a sort of alarm bell in case of flooding of the river.

On one of the edges was placed a short inscription connected to Pope Sixtus IV: “1475. You who pass through here thanks to Sixtus IV, pray God to keep him in good health for a long time. Go in peace, whoever you are, but only after you have said this prayer“.

In 1599 the Sixtus Bridge was restored by Pope Clement VIII, who had the paving and parapets in travertine renewed, until in 1880 the works for the construction of the embankments deeply altered its appearance, with the placement of cast iron parapets. Luckily, the restoration that took place for the Jubilee of 2000 has returned to Rome the 15th Century appearance of the bridge.