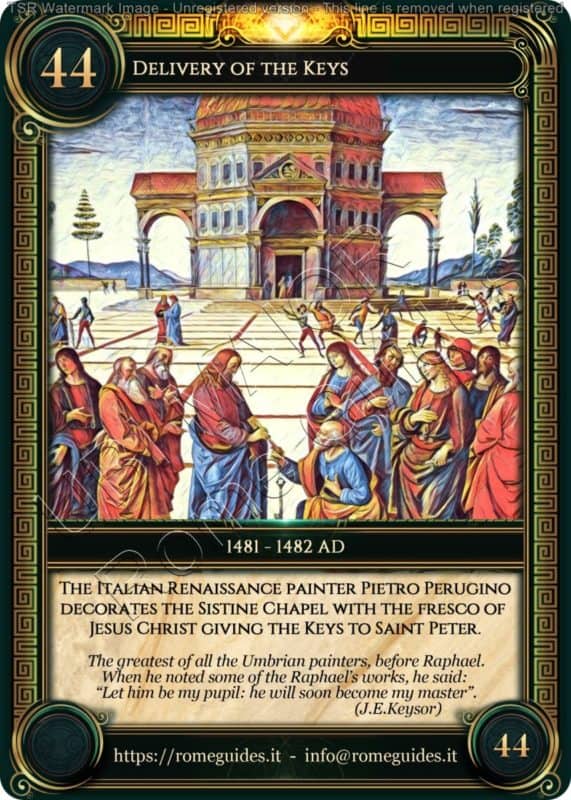 DELIVERY OF THE KEYS

Pietro Vannucci, real name of Perugino, was an Umbrian painter, owner of two very active workshops in Florence and Perugia and considered one of the most influential Italian painters of the First Renaissance, so much to be considered the master of Raffaello Sanzio.

In the summer of 1481, at the behest of Lorenzo de Medici, Perugino left for Rome together with Sandro Botticelli, Domenico Ghirlandaio, Pinturicchio and some other painters among the best known in Florence: the goal was the decoration of the side walls of the Sistine Chapel, which would have narrated the history of salvation through the events of the Old Testament, with reference to the life of Moses, and the New Testament, connected to the life of Christ. The decoration of the opposite walls had to be marked by an evident parallelism.

The scene of the Delivery of the Keys, painted on the northern wall, was organized by Perugino on two horizontal bands, one in the foreground and one as a background.

In the foreground the painter chose to depict Christ in the act of delivering the keys of paradise to Peter, on his knees and surrounded by the other Apostles (among whom, according to some scholars, the artist even inserted his own self-portrait, recognized in the man in the black robe who looks towards the spectator in the group to the right): the keys, one golden and the other silver, represented the divine and temporal power.

The most emblematic aspect of the work, however, concerns the scenographic apparatus that amplifies the main scene, framed by the perspective lines of a floor with large marble squares inside a square decorated with monumental buildings. In the background towers a mighty building with a central plan and a dome, a clear transposition of the Temple of Jerusalem, flanked by two triumphal arches that evidently echo the grandiose Arch of Constantine. The landscape that closes the background is typical of the artist, with the rolling hills dotted with slender trees, which fade into the distance towards the horizon.

The fresco, for its so perfect and ordered spatial organization, conditioned many painters of the successive ages, being considered the Perugino’s absolute masterpiece. The work emphasized the transmission of the spiritual power from Christ to St. Peter, justifying the primacy on which the whole papal authority was based.