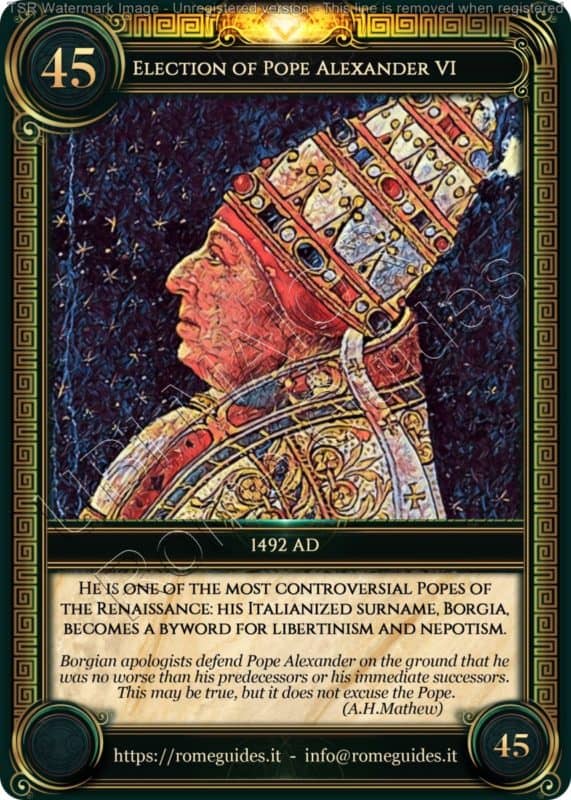 When, on August 6th 1492, the Conclave for the death of Pope Innocent VIII opened, the cardinal vice-chancellor Rodrigo Borgia had just passed the age of sixty: he was a handsome man, with distinguished manners and a versatile intellect, a good connoisseur of canon law, an expert in the administration of the Curia and quite skilled in dealing with affairs.

However, according to those who knew him, he had no particular gifts, nor had he acquired fame for particular enterprises, nor had he produced any artistic or literary work that could have recommended him to posterity: he was instead considered impulsive and passionate, dominated by emotionalism, a lover of luxury and magnificence, almost as if he were a Renaissance nobleman rather than a man of the Church.

In addition to this, Rodrigo Borgia was very attracted by carnal pleasures too often not legal. In 1460, Pope Pius II had to admonish him with a serious letter for having participated in a scandalous party: the cardinal, however, promptly apologized.

As a demonstration of what his pleasures were, Rodrigo Borgia had three children (probably by different women) between 1462 and 1471. Then he had four more with his lover Vannozza Cattanei: Giovanni, Cesare, Lucrezia and Jofré. As if this were not enough, in the last years before arriving at the Conclave, Rodrigo Borgia had a relationship with Giulia Farnese, the beautiful and very young wife of Orsino Orsini: the intimacy with Giulia Farnese continued even after the election of Borgia to the Papacy and was so obvious, that anyone who wanted the favor of the Pope asked her.

The election of Rodrigo Borgia was a real surprise: it was not a recognition of exceptional qualities or a simple compromise between the two factions of cardinals. In all probability, the real master of that Conclave was the money, which gave strength to the undecided and convinced even the opponents, determined to avoid yet another schism. On August 11th 1492, after a last poll, it was announced to the people that Rodrigo Borgia had been elected Pope and had chosen the name of Alexander VI.

The election was welcomed in Rome, as was usual, with apparent exultation: the wisest and most prudent ones, however, who were still working for the good of the Church, looked upon this announcement as a sad omen for the future.