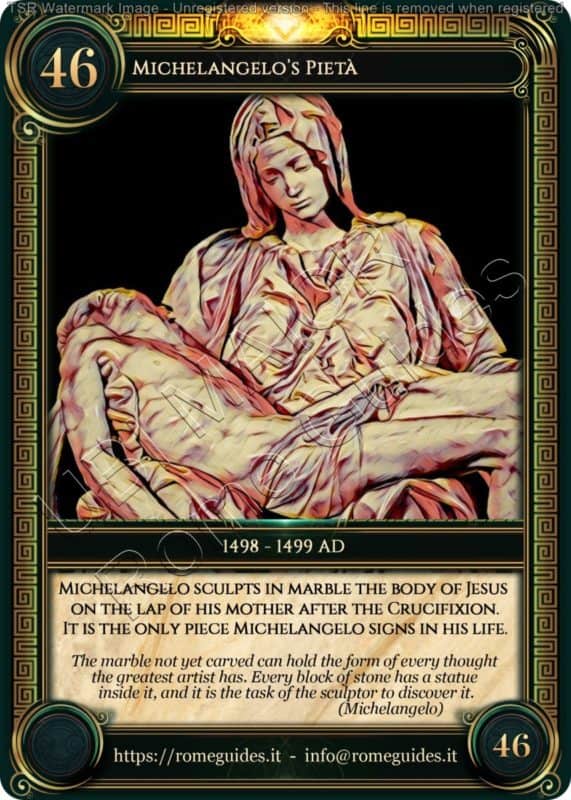 In 1497 Michelangelo was commissioned by the cardinal Jean Bilhères to sculpt “a Virgin Mary with a dead Christ in her arms, as large as a man“: at the end of the 15th Century, this was a typical subject in Northern European countries.

Jean Bilhères was cardinal of St. Sabina and governor of Rome on behalf of the French King Charles VIII: he commissioned the statue of the Pietà to be placed in the Chapel of St. Petronilla, which belonged to the Kings of France and was located at the side of the transept of the old St. Peter’s Basilica. The Jubilee celebrations of 1500 were approaching and many French pilgrims would have visited the chapel, and Michelangelo Buonarroti’s Pietà would have been its artistic jewel.

Michelangelo was incredibly exigent in the choice of the raw materials and he spent nine months to choose the perfect block of marble and to transport it from the quarries of Carrara to Rome. After that, in August 1498 he signed the contract for the execution of the work, agreeing to complete it within one year.

Michelangelo’s Pietà was 174 centimeters high and 195 centimeters wide, and although the commissioner requested a life-size work, Christ was smaller than the Virgin, although the difference in size was disguised by the rich drapery of Mary. The marble of the Pietà was so striking for its brightness that it was rumored that Michelangelo had devoted to polishing it a time equivalent to that needed to sculpt his masterpiece: the desire to give it such a brightness derived perhaps from the partial darkness of the Chapel of St. Petronilla.

Although the Pietà had immediately aroused great admiration, some criticisms were made about the youthful appearance of the Virgin’s face, which looked like a teenager. This was a conscious choice of Michelangelo, and it was of theological nature: the Virgin had to appear incorrupt, as the symbol of a crystallized youth that cannot wither.

The Pietà was the only statue that Michelangelo signed in his whole life: the signature was engraved on a transversal band above the Virgin’s breast. The reason for this gesture was explained by the painter Giorgio Vasari: some gentlemen from Lombardy were admiring the beauty of the statue of the Pietà and, after having exalted it, they tried to identify its author. Finally they were convinced that it was the work of a fellow countryman, the sculptor Cristoforo Solari. Michelangelo, who had listened to the discussion, hid in the church and during the night carved his name on the statue.