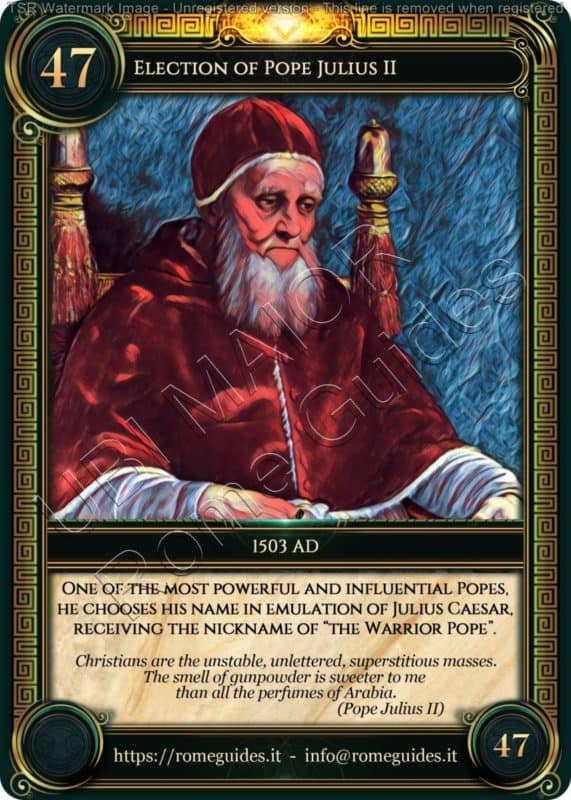 During the Conclave that elected Rodrigo Borgia as Pope Alexander VI, the great rival of the future Pontiff was Giuliano Della Rovere, who refused to take part in the shameful buying and selling of votes organized to persuade the cardinals.

With the rise of Rodrigo Borgia, Giuliano Della Rovere took refuge in the fortress of Ostia, from which he came out only accompanied by armed protection and from which, on April 24th 1494, he embarked for France, trying to use his influence to get the Pope in trouble. When in 1494 the French King Charles VIII decided to invade the peninsula, Giuliano Della Rovere supported the expedition in the hope that Alexander VI would have been deposed.

The result was not what was hoped for, given the homage paid to the Pope by the French sovereign, who destroyed every chance of Giuliano Della Rovere for his final consecration and saw him rewarded with the simple assignment of the Abbey of Montecassino.

After an attack of syphilis in 1499 and the participation to the magnificent Jubilee of 1500, the position of Giuliano Della Rovere suddenly became problematic when Cesare Borgia (son of Pope Alexander VI) conquered the Duchy of Urbino, until then held by Guidobaldo di Montefeltro, linked to the Della Rovere family. Prudently, he chose at this point to voluntarily go into exile in Savona, until Pope Alexander VI died in 1503.

During the September of the same year, the Conclave elected Pope Pius III, whose Pontificate, however, lasted only 26 days due to the Pontiff’s illness: for Giuliano della Rovere the chance of a papal election finally arrived. In order to achieve this result, he temporarily put aside his rivalry with the Borgia family, promising Cesare Borgia, in exchange for his election, the official approval of the personal dominions that he had built in central and northern Italy. Once the agreement was reached, the new Conclave that opened on October 31th 1503 was the shortest in history, and in just ten hours Giuliano Della Rovere was elected Pope with the name of Julius II.

Julius II immediately made clear what would have been the style of his Pontificate: on December 2nd 1503 Cesare Borgia was captured and imprisoned in the St. Angel’s Castle, while all his possessions returned to the property of the Pope.

The goal of Julius II, in the midst of a difficult political situation, was to consolidate the territorial dominion of the Church; to pursue this strategy he was aware of the fact that it was necessary to have a considerable military force. The first administrative and fiscal acts increased the papal finances precisely in order to sustain the expenses of war, even if necessary through the controversial sale of indulgences and ecclesiastical offices. Julius II’s efforts led to the creation of famous military corps such as the Swiss Guard, founded by the Pontiff in 1506.

The Church began to assert its authority with weapons; for this reason, as well as for his impetuous and uncompromising character, Julius II earned the nickname “Terrible Pope“, which well summarizes the respect and fear that he was able to arouse in allies and enemies.