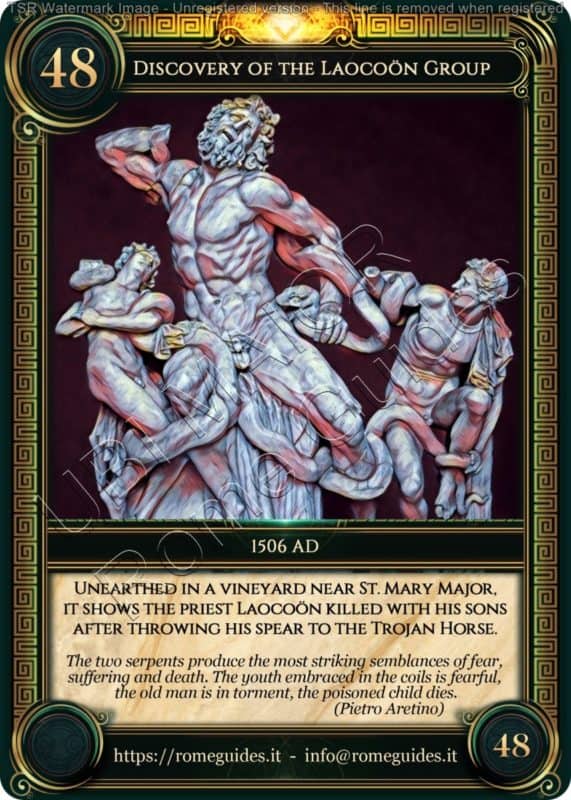 DISCOVERY OF THE LAOCOÖN GROUP

The group of the Laocoön was found on January 14th 1506 digging on the Oppio Hill, in a vineyard owned by Felice de Fredis, near the Domus Aurea of Nero and more specifically in the place where there were the Baths of Titus.

At the excavation, of astonishing magnitude according to the chronicles of the time, also Michelangelo Buonarroti and the architect Giuliano da Sangallo, sent by Pope Julius II to evaluate the discovery, attended in person. A chronicler of the time wrote that “all Rome rushed day and night to that vineyard, such that it seemed to be the Jubilee“.

Since its discovery, the sculpture was believed to be the work of the sculptor Haghesandros of Rhodes and his two sons, Athenadoros and Polydoros, an attribution made possible thanks to the chapter of the Naturalis Historia of the Roman historian Pliny, who spoke expressly of this work defining it “a glorious masterpiece, to be preferred to all things in art, both for painting and sculpture“.

The white marble sculpture, almost two and a half meters high, immediately received enthusiastic acclaim for its great dynamism, in which the three figures were tied in an almost inextricable tangle of naked bodies and serpentine coils.

According to Virgil’s account, Laocoön had opposed the entry of the wooden horse within the walls of Troy. The gods Athena and Poseidon, favorable to the Greeks, sent from the sea two monstrous snakes that wrapped and crushed the priest and his two sons Antiphantus and Timbrel.

Those present at the excavation were able to admire the faces of the three characters, from which different emotions transpired: from the aching astonishment of a son who looked to his father for help, to the attitude of renouncement of the other one, dying under the grip of the powerful snake, up to the cry of pain, anger and pity of Laocoön, who was trying to free himself, with his body violently twisted. The sorrowful expression of his face, pathetically frowning, with arched eyebrows and dilated nostrils, produced an almost theatrical psychological rendering, which greatly excited the discoverers.

Pope Julius II himself immediately understood the absolute artistic and symbolic value of the sculpture, and imposed its presence in his Belvedere Courtyard in the Vatican.