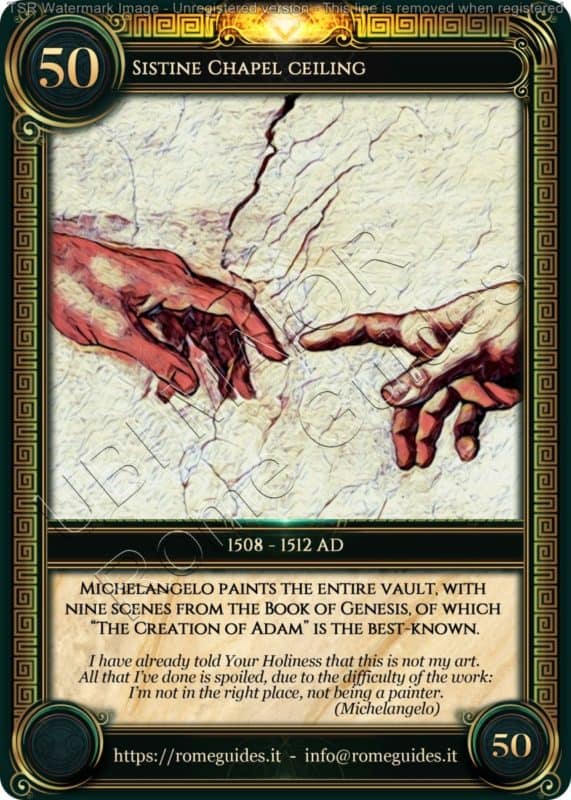 In 1508 Pope Julius II decided to give a new look to the Sistine Chapel (also because of an alarming crack appeared on the ceiling in 1504, which had made the chapel unusable for many months) and, following this idea, he commissioned the genius of Michelangelo Buonarroti to create a new pictorial decoration on the surface of the vault.

After a first simplified project, that Michelangelo judged too banal even if he didn’t feel painting as an art more congenial to him (he always declared himself a sculptor), the great artist suggested a very complex cycle, that kept in mind the 15th Century frescoes on the walls and that could integrate with them: the episodes of the biblical Genesis.

Michelangelo painted so an imposing architectural structure that overlapped the real vault, framing the scenes and creating an illusionistic upward thrust. It was an enormous fresco, divided into three concentric bands, as a result of Michelangelo’s unparalleled effort and compositional wisdom.

In the central band the images of the Genesis came to life, with couples of Naked Men that supported figured medallions. In the intermediate band Michelangelo arranged massive thrones flanked by pillars on which sat Prophets and Sibyls. The third band, the outermost one and bordering the paintings on the walls, was illustrated with the representations of the Ancestors of Christ, while in the four corners were painted episodes of the salvation of the people of Israel.

The painted figures, exactly as it happened for the Michelangelo’s sculptures, immediately seemed to want to free themselves from the same pictorial matter of which they were formed, expressing a dramatic plasticity. The isolation of the subjects was exalted by a convulsive motion made of muscular torsions and very bright colors, vivid and almost metallic, spread on the plaster of the vault with strong overlapping brushstrokes.

Michelangelo faced enormous difficulties in the realization of the frescoes of the vault, because he did all this work with very few assistants, in a daily confrontation between the genius of the artist and the physical limits of the man.

The inauguration took place on November 1st 1512 in the presence of Pope Julius II, who since that moment deeply loved the Sistine Chapel and the artist who had completely changed its appearance, despite the gruff and sometimes unbearable personality of him.