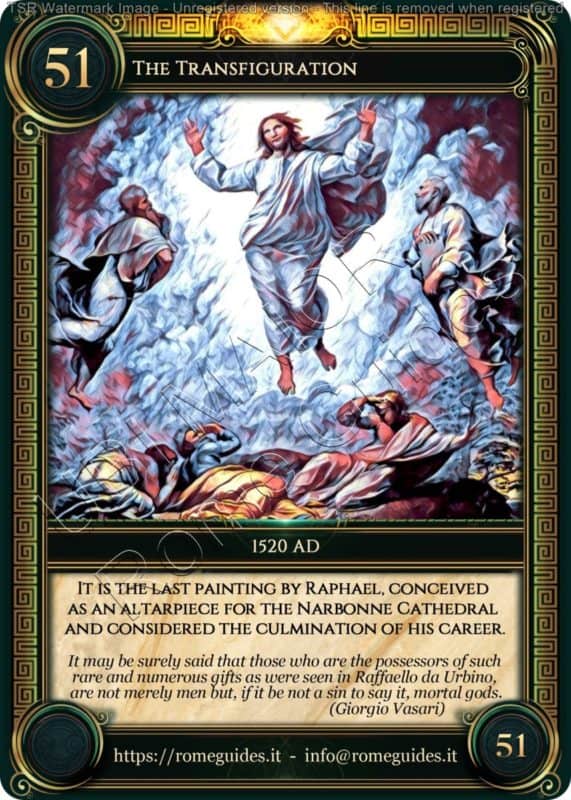 In 1516, the cardinal Giulio de’ Medici, the influential cousin of Pope Leo X, was a highly regarded patron throughout Europe, being (among others) bishop of Bologna, Worchester and Narbonne. Precisely for the cathedral of Narbonne, the cardinal commissioned two paintings: the Transfiguration by Raphael Sanzio and the Resurrection of Lazarus by Sebastiano del Piombo, for which, according to tradition, the cardinal asked Michelangelo Buonarroti to prepare a draft sketch.

Knowing that he would indirectly have had to compete with Michelangelo, Raphael understood that his Transfiguration of Christ would have had to be an unparalleled masterpiece, even more spectacular than the works produced up to that time.

The first choice of Raphael was on the dynamism of the work: the artist joined together two different passages of the Gospel, that of the Transfiguration of Christ and that of the young boy affected by the morbus lunaticus from which the apostles vainly tried to expel the demon that possessed him.

The painting was therefore conceived as a dynamic scene, not only in the movement and expressiveness of the protagonists represented, but also for the creation of two different chronological levels, a before and an after, shown in the pictorial composition.

The second choice was on the painting technique: the choice fell on the “greasy tempera“, defined as “so much brighter than oil” and able to maintain its light and intensity intact over time. In this way, Raphael created a perfect coexistence of brilliant colors, very harmonious in their combinations of unprecedented nuances, between the pinkish and green-blue robes of Moses and Elijah flanking Christ and the more earthly consistency in the lower part of the painting where warm colors dominated on the left, surrounded by cold tones, while on the opposite side there was the opposite effect.
At the top of the work, Raphael used the candor of white in the transfigured body of the Savior, a divine light capable of recalling the promise of the otherworldly salvation that awaits humanity.

The Transfiguration was Raphael’s final masterpiece, the last work the painter painted between 1518 and 1520, before dying at the young age of 37. The Transfiguration, completed in the lower part by Raphael’s assistant, Giulio Romano, was exhibited in the room where his body was lying, making the hearts of all who admired it burst with sadness.