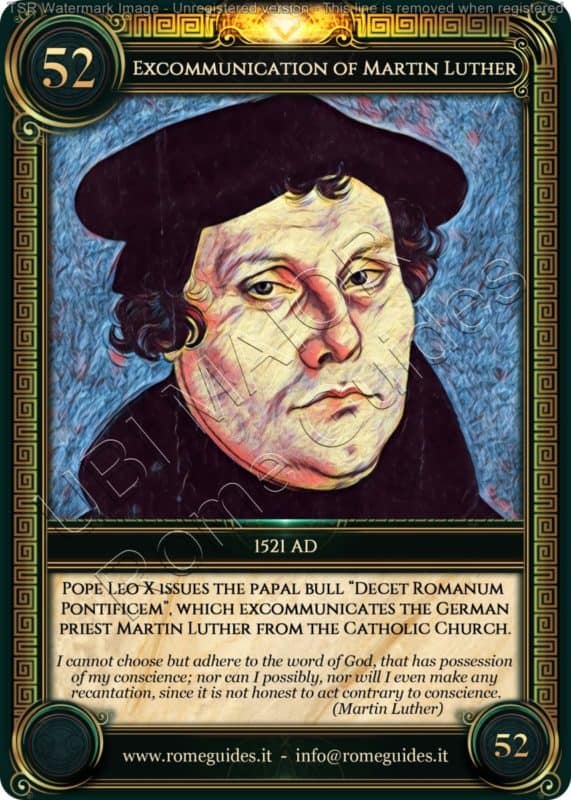 The German Augustinian friar Martin Luther, at the beginning of the 16th Century, created a deep fracture within the Roman pontifical power, spreading his religious vision to the masses also thanks to the technological innovation brought by the press.

The fundamental principle of his doctrine was the non-necessity of the Church’s intercession for the salvation of the soul, considered by Luther “a free gift of God“. It was a completely new approach to religion, without intermediation: the individual had to be able to access the Holy Scriptures on his own, to have his personal relationship with God and to be judged and saved by Divine Grace, not by the Church’s guided actions. This fact, added to the heavy criticism of the sale of indulgences made by Popes such as Julius II and Leo X, obviously distracted the individual from the idea of having to follow literally the words of the Holy See, undermining its prestige and power.

To support his doctrine, Martin Luther formulated in 1517 the 95 theses, posted on the church door in the castle of Wittenberg.

This action was considered by historians the beginning of the schism from Catholicism (made official in 1521 during the Diet of Worms) and at the same time of the Protestant Reformation.

In response to the papal excommunication, a few months later Luther published the Passional Christi und Antichristi, a booklet where the antithesis between Christ and the Pope in the guise of the Antichrist was represented in pictures with captions. The Passional was an enormous success in a world where the majority of the population was illiterate thanks to the effectiveness of the images, which were able to simplify Luther’s theses and make them accessible to all, spreading them widely thanks to the press.