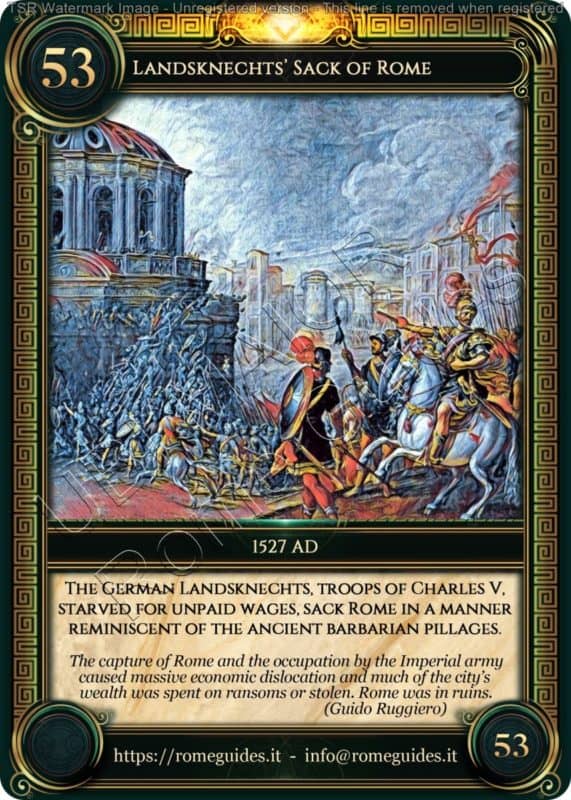 In 1519 the young Charles of Habsburg became Emperor under the name of Charles V, and was later crowned in the Cathedral of Aachen, on October 23th 1520, as Emperor of the Holy Roman Empire. So Charles V reigned over a huge Empire, including Spain, Southern Italy, Austria and Bohemia, Flanders and the Netherlands.

To counter this hegemony, the King of France Francis I created an anti-Spanish alliance, the League of Cognac (1526), which was also joined by Pope Clement VII, who was concerned that an over-powerful empire in the peninsula could have suffocated the territories of the Church.

However, Pope Clement VII had also been elected with Spanish support: Charles V considered the Pope’s turnabout an unforgivable betrayal and the punishment he reserved for him was cruel and terrible, considering that in Italy, on 1527, there were not less than 12,000 Landsknechts who were supposed to destroy the League of Cognac.

Charles V decided to leave them without pay and without food, so the Landsknechts first devastated the countryside, then marched on Rome. In those years the Germans, of Lutheran faith, considered Rome as a sort of “city of Satan” and the den of all vices: looting it, to their eyes, was not a sacrilege but an act of divine justice.

Once they reached the walls, the Landsknechts crushed the 3000 Swiss mercenaries who defended them and destroyed the entire city. The Roman citizens were massacred, nobles and merchants were tortured by the Landsknechts to reveal where they had hidden their treasures, priests were put in the pillory, nuns were raped, as well as women in their homes, churches were devastated and many works of art were destroyed.

Charles V, who was a fervent Catholic, did nothing to stop the looting. The Landsknechts remained in Rome for nine months, during which time the pope saved himself by barricading himself inside the St. Angel’s Castle with his court of cardinals, bureaucrats and diplomats, escorted by the Swiss Guard. At the end the Landsknechts withdrew only because the Church (after ten months of occupation) paid a very high ransom in gold and valuables. The city was left without food, the streets were full of unburied corpses, water was lacking because all the fountains had been destroyed and epidemics mowed down both the victims and their executioners.

The Sack of Rome of 1527, in the imagination of the time, was experienced as a symbolic rape: it marked the substantial end of the Renaissance era.