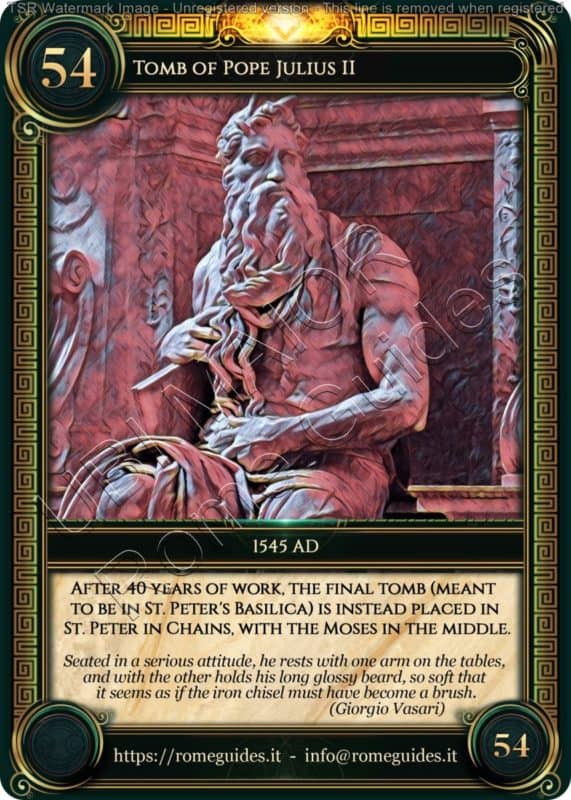 In 1505, Michelangelo was very popular thanks to the Pietà and the David, statues admired by all his contemporaries. Pope Julius II then decided to commission him the construction of his own tomb to be placed in St. Peter’s Basilica.

Michelangelo immediately abandoned any work in progress until that moment, to dedicate himself to the Pontiff’s project: the tomb had to be gigantic, pyramidal in shape, with about forty statues scattered throughout the structure, so as not to leave out any corner of it. The statue of the Pope on the top, accompanied by two angels, should have represented the awakening of the deceased during the Last Judgement.

Pope Julius II liked the project very much, but the other artists linked to the Pontiff did not appreciate Michelangelo at all. So, while the artist was in Carrara to choose the marble blocks, his competitors began to divert the Pope’s attention from the Buonarroti’s project, showing him many other works to exalt the glory of Rome, such as the renovation of the St. Peter’s Basilica.

When Michelangelo discovered all this, he was very disappointed and fled to Florence, only to return a few years later, with the Pope offering him the opportunity to decorate the vault of the Sistine Chapel and to continue the project for his tomb.

Upon the Pope’s death, however, his heirs did not want to incur such an exorbitant expense, and simplified Michelangelo’s initial project, eliminating many statues. In addition to it, Michelangelo was forced to sign a contract in which he agreed to not accept other works until the completion of the papal tomb. Michelangelo Buonarroti did not respect this clause and made other famous statues, such as the Minerva’s Christ.

In 1516, the heirs modified once again the project of the tomb, turning it into a sort of monumental façade decorated with numerous statues, with the Pope supported by two angels and surmounted by a Madonna with Child. Not even this project saw the light, because the new Pope Leo X commissioned Michelangelo to work on the Basilica of St. Lawrence in Florence, putting aside the work of the Tomb of Julius II.

In 1526, Michelangelo had completely abandoned the work for the heirs of Julius II, but they, having already spent time and money on this monument, began to threaten legal action against Michelangelo who, worried, decided to produce a fourth project for the Tomb of Julius II, even more simplified.

Pope Clement VII settled the matter, mediating between Michelangelo and the heirs of Julius II; Buonarroti committed himself to realize a fifth project in 1532, placing the tomb inside the Church of St. Peter in Chains and using some statues that Michelangelo had already realized before, among which the wonderful Moses. In spite of these conditions, also in this occasion Michelangelo could not complete the new project because Pope Clement VII commissioned him to paint the Last Judgment.

At that point, the heirs of Pope Julius II sued Michelangelo. It was the new Pope Paul III to make a fruitful mediation: in 1542 it was stipulated yet another contract, which provided for the completion of the tomb by Michelangelo or other artists under the guidance of Buonarroti. In 1545, finally, the tomb of Julius II, although very different than the original project, could be considered finished, with the mighty Moses of Michelangelo in the center of it, flanked by the statues of Rachel and Leah.