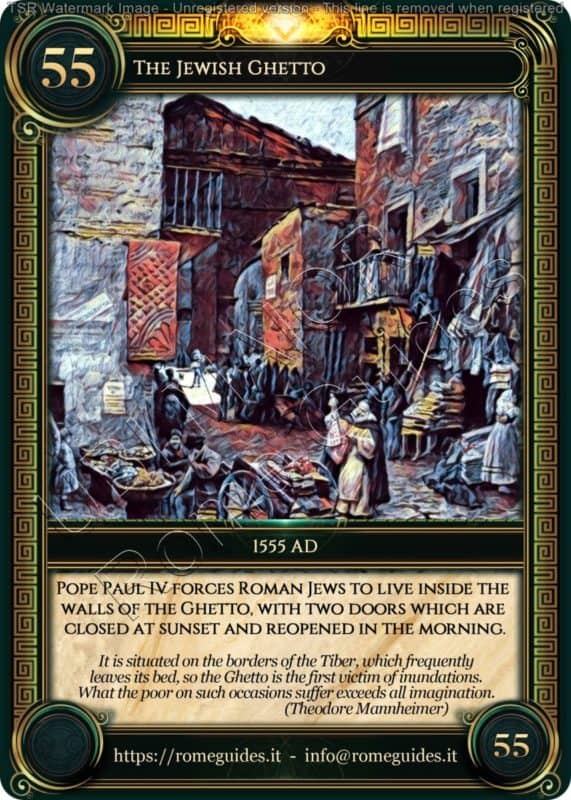 The Papal Bull clearly revealed its anti-Jewish nature: “it is extremely absurd and disgraceful that the Jews, whom only their own guilt subjected to eternal slavery, can show such ingratitude towards Christians, with the excuse of being protected by Christian love“.

The heaviest obligation to respect was, however, that of having to live in a place physically separated from the houses of the Christians: here was created the Jewish Ghetto, which in Rome was located in the Sant’Angelo District, where most of the Roman Jewish community had been living freely for a long time. Life in that small strip of land, also penalized by the proximity of the Tiber with its periodic flooding, was almost impossible.

In addition to the daily difficulties, there were also the so-called “forced sermons“: on Saturdays the Jews were gathered in certain churches and forced to listen to very persuasive sermons which, in the mind of the Pope, were supposed to “enlighten their darkened minds“.

The death of Pope Paul IV, which occurred on August 18th 1559 and was greeted by real ovations from the Roman citizens (demonstrating how the hate for the Pontiff had reached insurmountable heights), did not put an end to the shameful Jewish Ghetto, which continued to exist until 1870, when the doors were opened and the walls of the Ghetto were torn down as a result of the Unification of Italy.