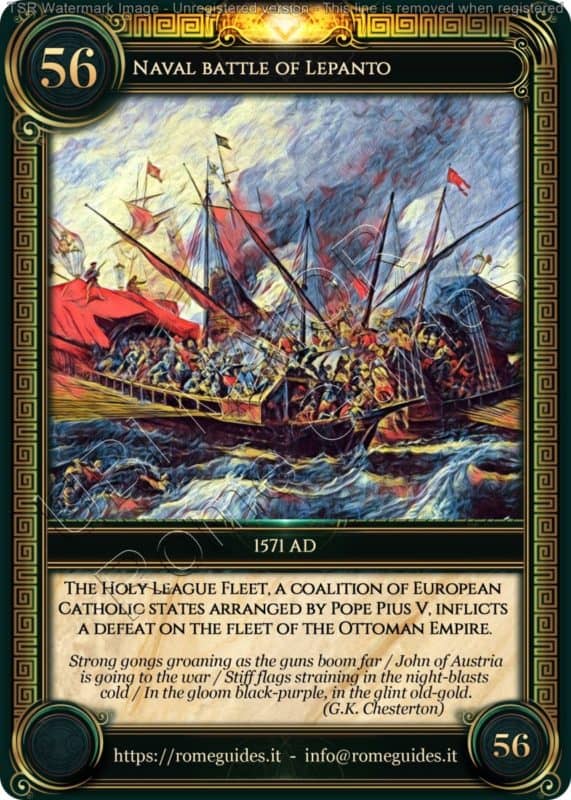 Since the middle of the 15th Century, the Republic of Venice had been fighting the Ottoman expansion in the Eastern Mediterranean. In the mid-16th Century, even the Christian world, through the Pope Pius V, had immediately started to unite the Catholic States of all Europe to counter the advance of the Ottoman Empire. The intent was not only political, but also religious: there was an obvious call to the Crusades, with the intention of reconquering the holy cities of Christianity.

The appeal was disregarded by France, which was in good diplomatic relations with the Ottomans, and by the Holy Roman Empire, too busy fighting heresies. Among the great European powers, Spain gave the greatest contribution.

The command of operations was assigned to Don John of Austria, half-brother of Philip II; the lieutenant was Marcantonio Colonna, the general captain of the papal fleet. It was formed then the Holy League, which sailed to Corfu on September 16th 1571 with a large fleet ready for the battle.

On October 7th 1571 the fleets of the Holy League and the Ottoman Empire clashed in the current Gulf of Corinth, then known as the Gulf of Lepanto. The Christian forces were equipped with 212 ships with 30,000 soldiers and 40,000 oarsmen and sailors; the Ottoman forces were slightly more numerous, with 251 ships, 32,000 soldiers and 50,000 crew members, but they had fewer cannons.

Decisive for the fate of the Battle of Lepanto was the attack of the Venetian forces on the left, led by the Venetian commander (and future Doge) Sebastiano Venier. Despite the total losses of about 8,000 men for both sides, the Christian victory was clear: the Holy League was able to capture 137 galleys and thousands of men, freeing about 15,000 European slaves to the oars and losing only 17 boats.