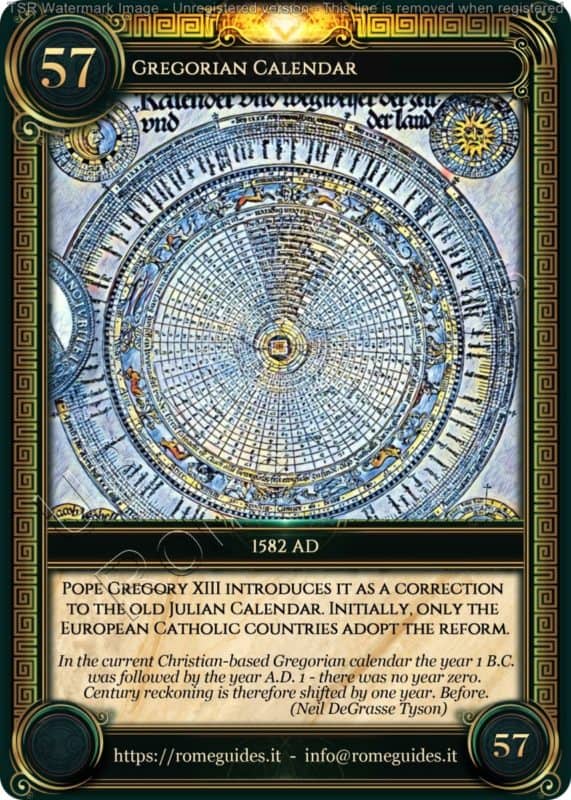 On October 1582, with the Bull Inter Gravissimas promulgated by Pope Gregory XIII, a new calendar called “Gregorian” began to be used, being still in force today in most of the western world. The aim of the calendar was to put back order in the scanning and calculation of time, adopting a more precise system than the Julian Calendar which had been used until then.

The Julian Calendar had established that the years whose numbering was a multiple of 4 had to be counted as a bisextile year, in order to follow better the duration of the solar year: therefore, a year of 366 days was foreseen every three 365 days.

The problem is that this average duration did not correspond exactly to that of the solar year: recent astronomical observations had indeed discovered that the solar year lasted 11 minutes and 14 seconds less than that indicated in the Julian Calendar. Therefore, every 128 years the Julian Calendar accumulated a one-day lag, staggering the counting of days with respect to that of the seasons.

This offset became a problem especially for the organization of the Liturgical Year, which started from Easter, whose date was set by calculating the first Sunday after the spring full moon.

At the end of the 16th Century, then, it was decided to reform the calendar in order to recover the lost days and to calculate a new average length of the year, in order to avoid that the mismatch would be repeated in future years. The task was entrusted to the Jesuit Cristoforo Clavius, the cartographer and mathematician Ignazio Danti and the astronomer Giuseppe Scala: the group of experts based on the calculations of Nicolaus Copernicus published forty years earlier.

The new calendar became immediately effective in Italy, Spain, Portugal, France, Poland, Netherlands, while for the other Catholic countries it was necessary to wait until five years later.