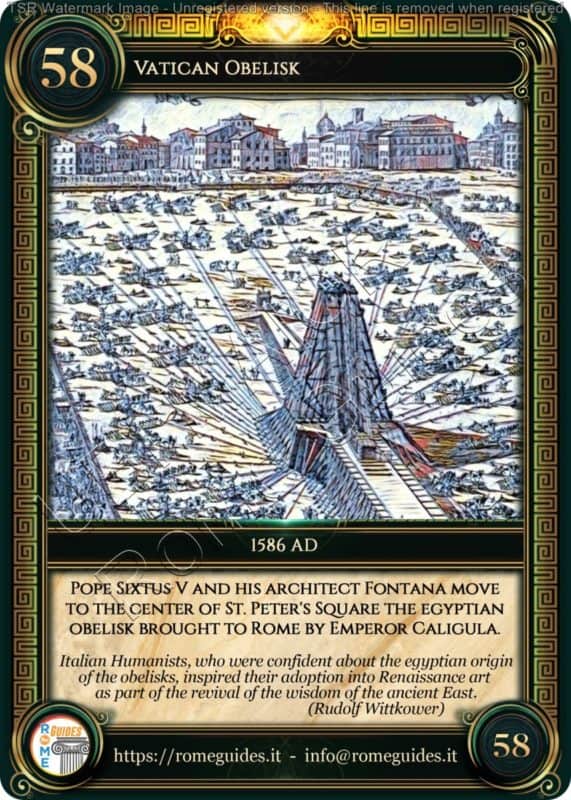 In the 1st Century AD, the Emperor Caligula arranged for a gigantic granite obelisk to be transported from Alexandria in Egypt and placed it in his Circus “in ager vaticanus”, where the martyrdom of St. Peter took place and near the cemetery where the Saint was buried.

In 1586, Pope Sixtus V wanted the obelisk to be placed in the center of St. Peter’s Square: he commissioned his trusted architect Domenico Fontana to carry it and, despite the short distance to be covered, it took him about four months to complete the work.

In order to be able to carry out the complicated manoeuvres of erection in the most efficient way, the Pope imposed very strict rules: as the architect himself recounts, “anyone who went beyond the limits of the work area or made the slightest noise would have been punished with death“. Not exactly an advantage for the 900 men and 140 horses who had to struggle with 327 tons of granite!

Everything proceeded in the right way, but at the end of the work, when the obelisk was already in a vertical position, something unexpected happened: the ropes with which it was tied began to slip. In the general bewilderment, when all seemed lost, a voice rose from the square: “water to the ropes!!!”. The shout had come from the Ligurian sailor Giovanni Bresca. His instructions were immediately followed: the wet ropes tightened and the operation was completed. The sailor had to be executed for having spoken in defiance of the order of absolute silence, but the Pope granted him pardon, allowing the sailor and his family to supply the Vatican with palm branches for the ceremonies preceding Easter (a privilege that still exists today).

Pope Sixtus V, who was very superstitious and not at all convinced of the sacredness of the obelisk, had “Christus vincit, Christus regnat, Christus imperat, Christus ab omni malo plebem suam defendat” (Christ the Victorious, Christ the King, Christ the Emperor, may Christ defend his people from all evil) written on its pedestal: it was an exorcistic and at the same time propitiatory formula, which in the Middle Ages was used to ward off illness.

The spire of pink granite, 25 meters high, is suspended from the base because it rests on the backs of four lions, the heraldic symbol of Sixtus V; according to a legend, whoever managed to pass through the space between the base and the bottom of the obelisk would have been forgiven for every sin.