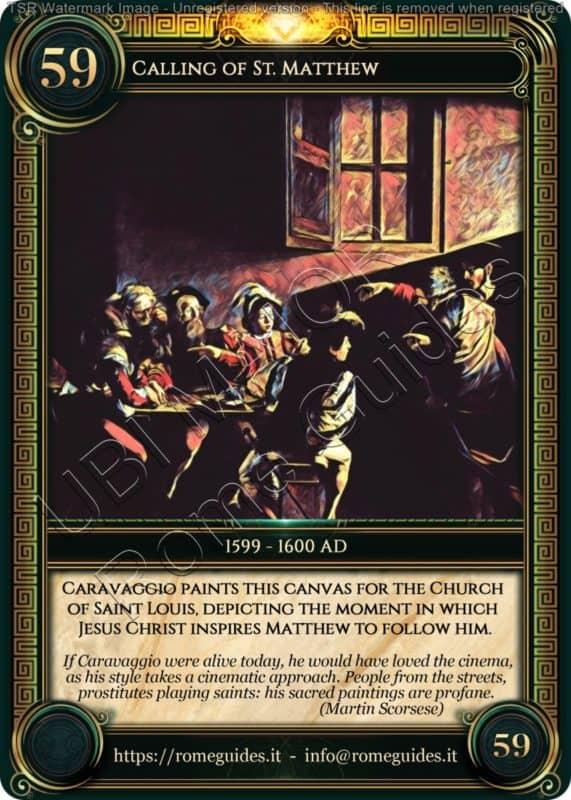 In 1565, the French cardinal Mathieu Cointrel bought a chapel in the Church of St. Louis of the French. The decoration was initially entrusted to the painter Giuseppe Cesari, with whom Caravaggio collaborated during his first period in Rome, but then in 1599 it passed into the hands of Caravaggio himself, who had to deal with a theme chosen by the commissioner: scenes from the life of St. Matthew.
On the left wall, Caravaggio placed a large canvas over three meters wide, depicting the Calling of St. Matthew.

Caravaggio strictly followed the Holy Scriptures. St. Matthew was a “gabelliere”, a public officer in charge of collecting taxes, and Caravaggio chose to represent the scene at the precise moment in which the tax collectors were charging the taxes at the counter and Jesus told Matthew to follow him.

On the left side of the canvas Caravaggio inserted the five tax collectors, imagined in Capernaum in Galilee but dressed as they would have been in Rome at the end of the 16th Century.

The two characters on the left were depicted intent on counting coins, the two on the right dressed as mercenary soldiers of the period, while the character in the center depicted Matthew, in the act of pointing to himself with his finger.

On the right side of the canvas, Caravaggio painted Christ and St. Peter, represented as if they belonged to another historical era, barefoot and dressed in tunics: both point to Matthew as the chosen disciple.

Caravaggio therefore created two completely separate epochs. To act as a bridge between these two blocks (representing on the one hand the earthly life and material goods and on the other hand the afterlife) there was the hand of Jesus Christ, perfect citation to that of Adam painted by Michelangelo in the Sistine Chapel, which ideally saved from sins by showing the right way.

This extraordinary work, as well as to consecrate definitively the success of Caravaggio, represented a real break with the past. It was the first time, indeed, that a sacred scene was depicted in such a raw way, so real and so actual: the clothes and the setting made people think of a Roman tavern, with only one window with darkened glass. The scene, invaded by a cone of otherworldly light, perfectly represented Caravaggio’s main talent: his ability to be innovative, modern and timeless, making him famous throughout Europe and an inspiration for many other artists.