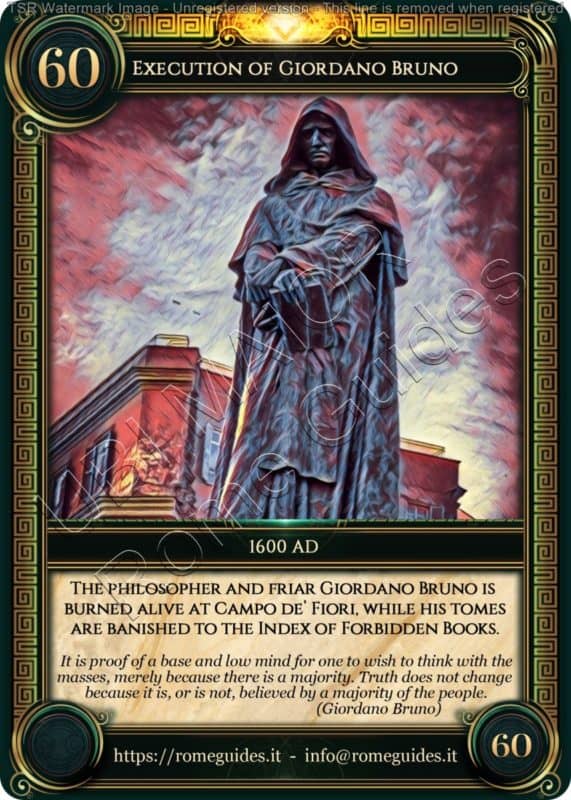 After a trial in Venice, in 1592 Giordano Bruno was delivered to the Roman Inquisition and imprisoned in the jails of Rome, where he remained for eight years, imprisoned in a long and tortuous judicial process in the hope that he would abjure.

Although engaged in a vain self-defense, marked by a sharp and incisive style, Giordano Bruno never bent to the point of denying his own positions in order to save his life. The Court of the Inquisition accused him of denying transubstantiation, of having heretical opinions on the Trinity and the incarnation of Christ, of believing in the existence of multiple eternal worlds, of practicing divination and magic, of not believing in the virginity of Mary and even of despising the relics of the Saints and of being lustful.

Giordano Bruno, convinced that he had nothing to repent of, did not submit, refused to admit the heretical nature of his ideas and did not disavow them: between the life imprisonment, in case he had abjured, and a cruel and painful death, he however chose this second option.

In this sense, on January 20th 1600 Pope Clement VIII, refusing to make him inflict further torture requested by the cardinals, condemned that “impenitent, obstinate and pertinacious” man to be burned alive at the stake.
At the reading of the sentence, Giordano Bruno turned to his judges and in a threatening tone thundered: “Perhaps you tremble more in pronouncing this sentence against me than I do in hearing it“.

Delivered to the Governor of Rome, he was imprisoned in the criminal prison of Tor di Nona awaiting execution initially scheduled for February 12th, but then postponed to February 17th. He was taken from the cell at dawn by the Confraternity of St. John Beheaded and led in the Roman square of Campo de ‘Fiori chained, with the penitential dress and, as a sign of disrespect, with a wooden clamp that prevented him from moving his tongue and, therefore, to speak. When he arrived in the square, he was stripped naked and tied to a pole on top of a pile of wood, where he was burned alive, while the Brotherhood sang the litanies: Giordano Bruno was fifty-two years old. Until the last moment the priests tried to make him repent so that he would have a less bloody death, but there was nothing they could do; when they handed him the crucifix to kiss, Giordano Bruno turned away.

The tragic judicial affair, the physical and psychological torture inflicted during the years of detention and the cruel death of Giordano Bruno, in addition to arouse horror and discredit the hypocritical and obscurantist Church of the time, transformed Giordano Bruno in the symbol of secularism and anticlericalism, until he became a martyr of the freedom of thought.