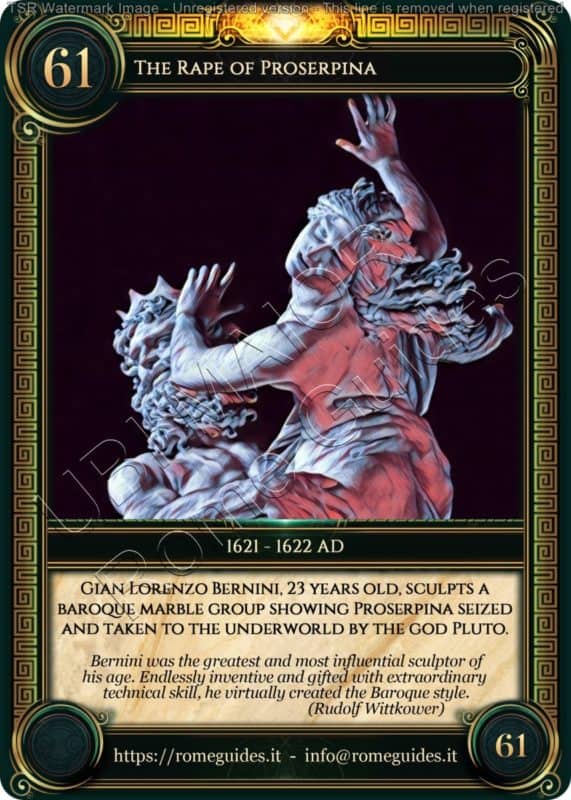 THE RAPE OF PROSERPINA

At the age of just 23, in 1621, the great Baroque artist Gian Lorenzo Bernini started to sculpt an absolute marble masterpiece: the Rape of Proserpine is not just a simple sculpture, but a real scream carved in the purity of Carrara marble, which under Bernini’s hands becomes flesh, muscles, nerves, silk skin, in a perfect mix of terror and sensuality.

The commissioner of this work was the cardinal Scipione Borghese, refined patron and one of the most powerful men of the 17th Century in Rome. The subject of the work may seem unusual for a man of the church, even if he was a great lover of classical culture: the inspiration is indeed a myth of Greek origin, narrated by Ovid in his Metamorphoses. The young and beautiful Proserpine, daughter of the goddess of wheat Ceres, was picking flowers in a meadow, when the god of the underworld Pluto saw her and fell in love with her, deciding to kidnap her. Ceres abandoned the fields to look for her and went on strike, causing a terrible famine; when Jupiter intervened, he was forced to mediate, making Proserpina spend six months with her husband in the underworld (autumn and winter) and six months with her mother Ceres (spring and summer).

Bernini cut out the climax of this story and offered the spectator the maximum of pathos in a scene with a strong theatrical impact: Pluto surprised Proserpina from behind and she recoiled appealing to all her energies, while invoking her mother in a desperate cry. It was a vortex of naked bodies that left nothing to the imagination, showing strength and eroticism, terror and shame. Bernini’s great mastery in marble workmanship was immediately apparent in every detail: Pluto’s hair and beard resembled the mane of a lion, his powerful muscles were firmly planted on the ground, while the delicacy of Proserpina’s flesh caught the eye, with Pluto’s hand sinking into her left thigh, creating one of the most disturbing details in the history of art.

The work certainly represented a turning point for art. Although young, Bernini was then already an acclaimed sculptor: after this work, he was considered by all an authentic genius.