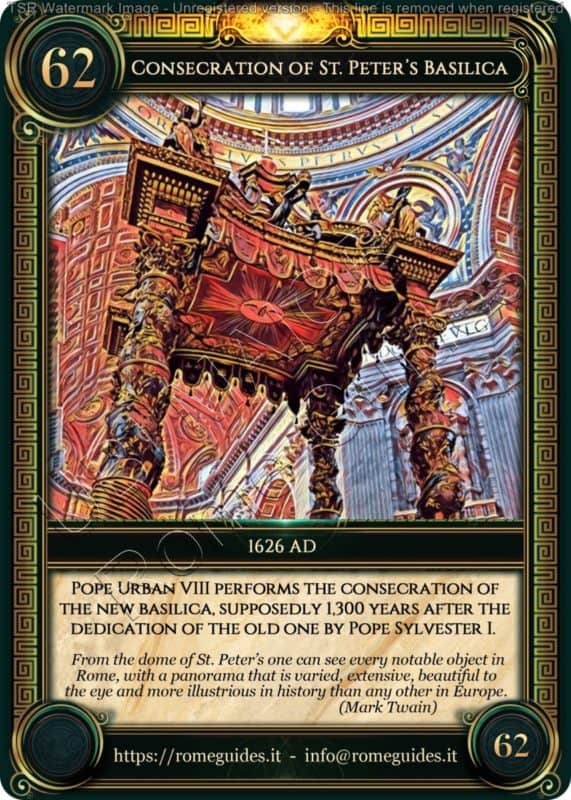 After 120 years of work, in which many of the best architects of the 16th and 17th centuries were involved, the most important temple of Christianity was officially inaugurated: on November 18th 1626 Pope Urban VIII consecrated the St. Peter’s Basilica.

Built on the burial place of the Apostle Peter, the project of a new basilica in place of the one built by Emperor Constantine in the 4th Century was promoted by Pope Nicholas V around the middle of the 15th Century, but the laying of the first stone took place with Julius II on April 18th 1506. The direction of the work was initially entrusted to Bramante, who opted for the Greek cross plan, but the intervention of Michelangelo gave a different imprint to the work, marking forever the architectural profile and the location in the urban fabric of Rome.

It was Michelangelo to design the imposing dome, today considered a symbolic monument of the Capital, erected after his death by Giacomo della Porta.The last fundamental retouching of the original project before 1626 was due to Carlo Maderno, who prolonged the nave creating a Latin cross plan and erected the new façade.

On the occasion of the consecration, the new basilica was illuminated along the façade and on the dome with a gigantic quantity of torches and lanterns. While the torches had already been used for the illumination of the church since the 14th Century, with workers using simple ropes to lower and light them simultaneously, the lanterns were a real innovation: they were braziers filled with fat and sawdust, ensuring a fire of at least six hours, obviously renewable. The show was an enormous success, so much so that it was even remembered centuries later in a poem by the Roman poet Giuseppe Gioacchino Belli.