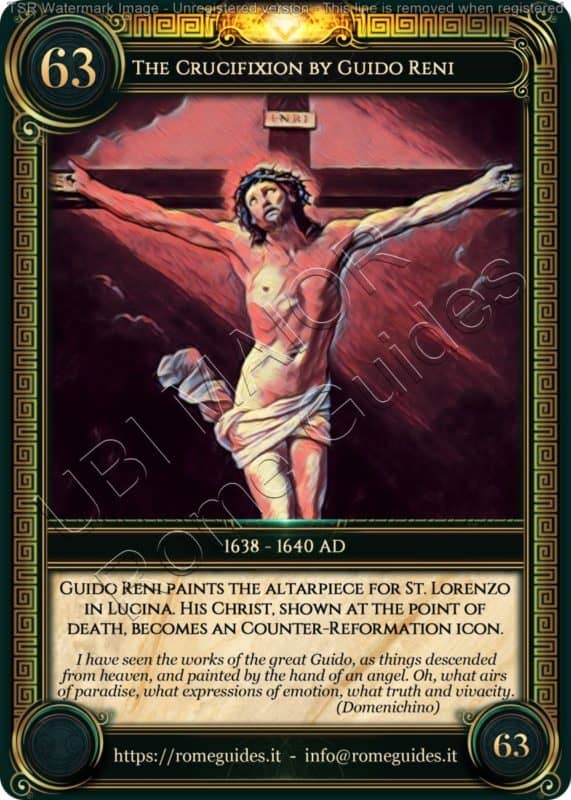 THE CRUCIFIXION BY GUIDO RENI

The baroque art had already produced many masterpieces in Rome, but in the Church of St. Lawrence in Lucina suddenly appeared a work of art with a particular flavor, able to focus on itself the attention of anyone who entered advancing towards the altar.

Beyond the artistic value of the canvas, the work of Guido Reni, one of the greatest masters of the 17th Century in Italy, what immediately struck the visitors of the Church of St. Lawrence was the figure of Christ which, except for the crown of thorns (without blood), did not show any signs of the Passion. There was not the canonical wound on the side and even the nails, inevitably present, would not have been able to support anything: the nails were there only for scenic completeness, but there was no torment of the flesh.

Even the background made a profound impression. In a dark scene, illuminated by blades of dim light, behind the Cross (set on a barely visible Mount Calvary, and with a skull at the foot of it) stretched a city with groups of people walking. The city was surrounded by turreted walls and had a large building in the center, probably a holy building: this is the Jerusalem imagined by Guido Reni.

Jesus’ gaze was upward, turned to the Father. There was no feeling of pain in that crucified Christ, but only a glimmer of ecstasy: his body was pearly, his eyes were open, his face was illuminated. Christ was not disfigured by pain, but transfigured by the vision of God: his face was serene and satisfied, and he was no longer looking down on the world of men, but up at the world of God.