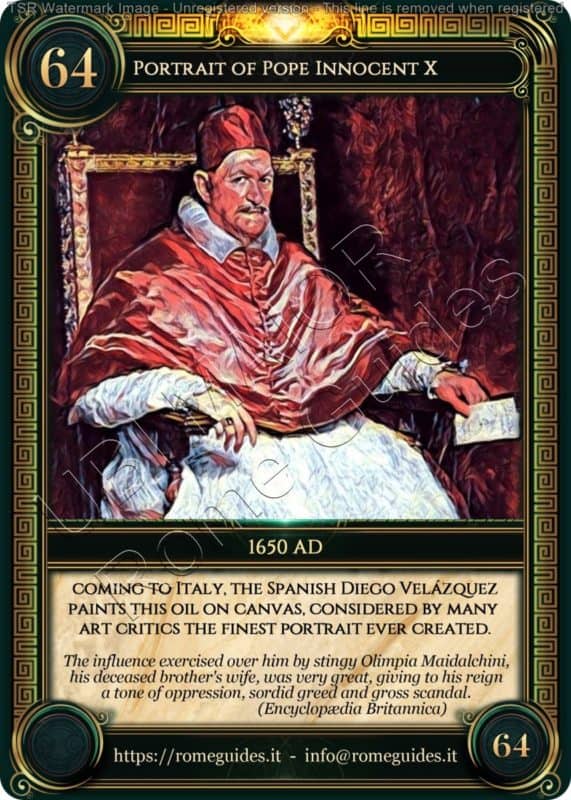 “Too real”. This is how Pope Innocent X expressed himself, complaining about the excessive realism with which the painter Diego Velazquez had portrayed him. Giovan Battista Pamphilj, real name of the Pope, was already acquainted with the Spanish artist, even before he ascended to the papal throne in 1644. In 1629 Velazquez stayed in Rome for the first time, having the opportunity to look at Italian painting, which strongly influenced him, leaving an indelible trace in his production, specifically thanks to Titian.

Twenty years later, in 1649, Velazquez returned again to Rome; by this time the fame of the Spaniard echoed throughout Europe, and in 1650 Pope Innocent X decided to have himself portrayed by this great master, who however had to persuade him of his own mastery by showing him the portrait made of one of his servants.

The painting was elaborated by Velazquez by playing marvelously on the red tones: the curtain of a dark garnet red, as well as the velvet of the chair, the purple biretta and the dress between vermilion and cinnabar.

The brushstrokes were full of pictorial matter, fast and dense: with a few rapid touches Velazquez conveyed the materiality of things and the porosity of the fabrics. In the midst of all these reds, the white part of the robe stood out, an explosion of luminous color in which all the folds of the dress could be perceived.

What fascinated, and at the same time intimidated, the Pontiff and all observers was the Pope’s face, endowed with an intelligent and severe gaze, with fire in the pupils, able to petrify the spectator like Medusa. No one had ever seen such realism in an official portrait of the Pope.

This work represented a turning point in the history of art. Sir Joshua Reynolds judged the painting as “the finest picture in Rome“, while the French historian Hippolyte Taine considered it “the masterpiece among all portraits” and said that “once seen, it is impossible to forget it“.