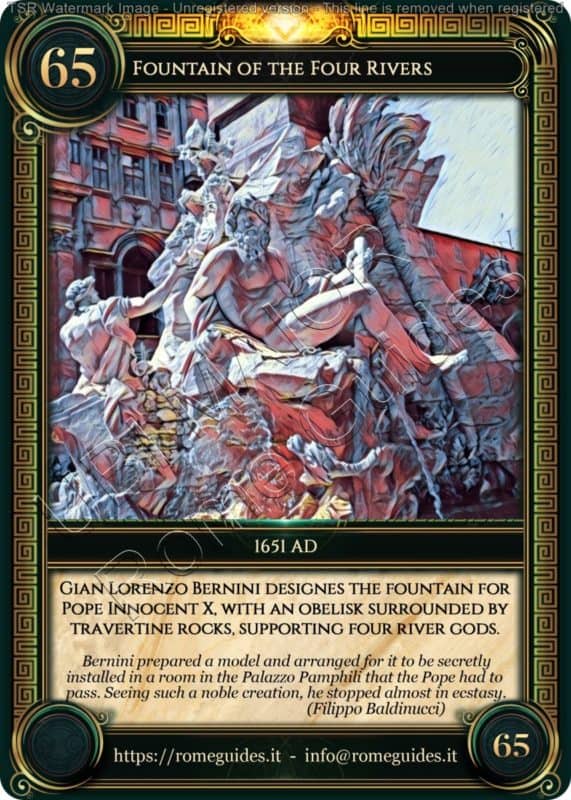 FOUNTAIN OF THE FOUR RIVERS

The Fountain of the Four Rivers, designed by Gian Lorenzo Bernini and inaugurated in 1651, was one of the most amazing baroque creations of the 17th Century, obtaining a place of honor in Navona Square, one of the most important squares of the city, in treacherous competition with the church designed by Borromini.

Commissioned by Pope Innocent X to decorate the square on which in those years he was building his family palace (the Pamphilj Palace) and the Church of St. Agnes, the fountain was to be decorated with the obelisk (a Roman copy dated to the time of the Emperor Domitian) that was lying in pieces in the Circus of Maxentius along the Appian Way.

The Pope entrusted the task to Gian Lorenzo Bernini, who had provided a huge silver model of the new fountain, imagined by the artist as a large travertine cliff, dug into a cave with four openings, supporting the granite obelisk placed on the top of it. The fountain, majestic and solemn, was to represent the focus of perspective for every visitor who entered Navona Square.

On the corners of the cliff Bernini placed the monumental marble statues of the four rivers, sculpted by his assistants, which represented the continents known at the time, identified also by the vegetation and the animals sculpted next to them: the Danube with the horse, the Ganges with the oar and the dragon, the Nile with the lion and the palm tree and finally the Rio de la Plata with an arm raised (perhaps to shelter from the rays of the sun represented by the obelisk) and next to it an armadillo.

On the top of the cliff Bernini inserted two large marble coats of arms of the Pope’s family, with the dove carrying an olive branch in its beak, and the same bronze dove was placed at the top of the obelisk.

Masterful fusion of architecture and sculpture, the Fountain of the Four Rivers was immediately highly appreciated, since it was able to express dynamism and movement in every sculptural detail, from the vegetation to the statues up to the fauna represented in the basin and on the cliff, immediately becoming the fulcrum of the whole surrounding square.