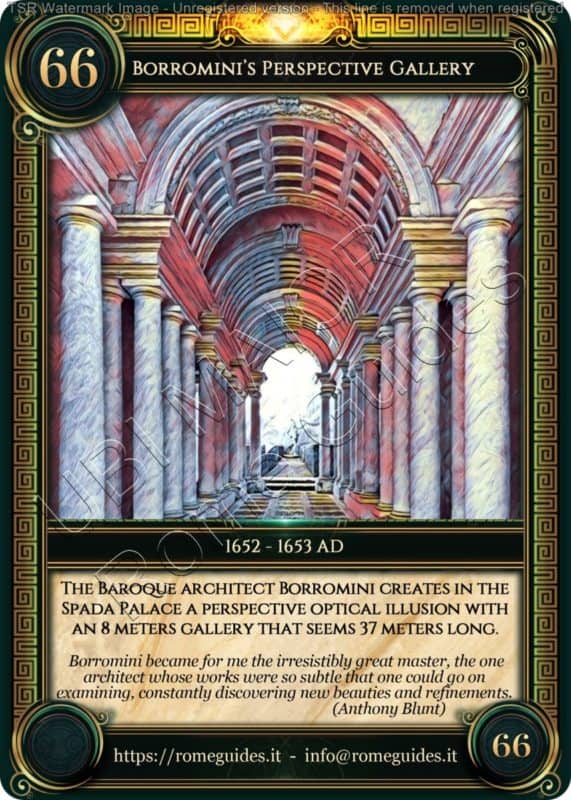 In 1540, the cardinal Girolamo Capodiferro commissioned to the architects Bartolomeo Baronino and Giulio Mazzoni the construction of a splendid aristocratic palace, rich of sumptuous stuccoes both inside and outside, on a façade admirably decorated with elegant sculptures and adorned with garlands of flowers and fruits.

The palace was bought in 1632 by the cardinal Bernardino Spada, who commissioned the great baroque architect Francesco Borromini to modify it according to the new tastes of the time. The cardinal, who had a strong passion for esotericism, astrology and perspective games, asked Borromini to surprise him with something particularly astonishing. Borromini did not disappoint him, creating a true masterpiece with his Perspective Gallery, built in just one year, between 1652 and 1653.

Borromini designed a colonnaded corridor 8.82 meters long that, thanks to a series of architectural and perspective tricks, seemed to measure about 35 meters.

Realized with the help of the Augustinian mathematician Giovanni Maria da Bitonto, this work of pure optical illusion was an immense success, testifying to the interests of Cardinal Spada, who had already commissioned other illusionistic games, even executed with the fresco technique.

To produce this amazing illusion, Borromini had to design some tricks. The planes of the colonnade, instead of proceeding in parallel, converged in a single vanishing point, while the lateral columns shrank towards the bottom and the mosaic floor gradually rose. The back wall of the gallery was originally painted with illusionistic fake vegetation, and only later hosted a statuette of a Roman warrior, apparently massive but actually only 60 centimeters high, which became visually the point of escape of the entire architecture.

The entire perspective game of the gallery was interpreted as Cardinal Spada’s desire to create a parallelism between the mundane life, in which the senses are deceived by the illusory nature of life, and the religious life, the only road that can lead to Salvation.