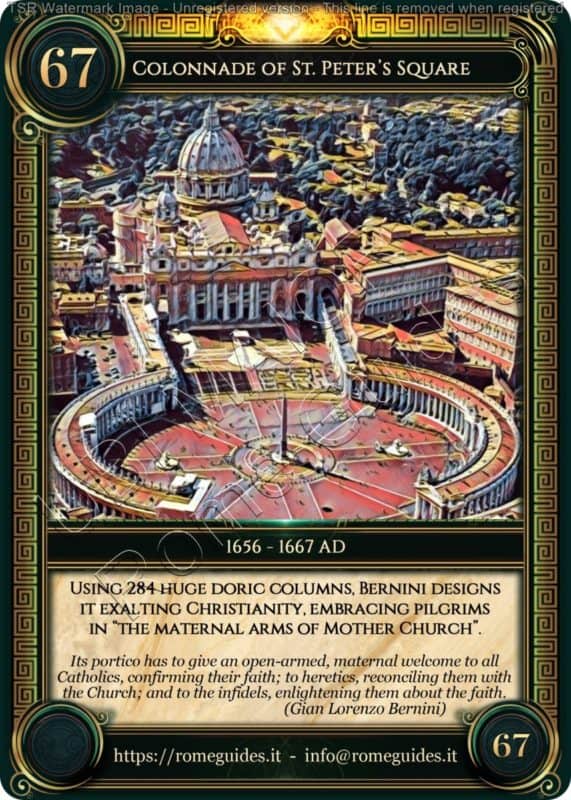 In 1655 Fabio Chigi became Pope with the name of Alexander VII. As an art collector and amateur of architecture, on the same day of his election he summoned the great Baroque sculptor and architect Gian Lorenzo Bernini to discuss a project that was particularly important to him: the construction of the Colonnade of St. Peter’s, which was intended to be so solemn and monumental as to arouse devotion and emotional involvement in the audience.

The Pope and the artist were almost the same age and they esteemed each other: they worked together on the project, creating a very elegant portico, similar to those that would have been found in Ancient Rome. The façade conceived a few years earlier by Carlo Maderno and considered too “flat” would finally have been preceded by a monumental stage.

The effort was titanic: eleven years of work (1656-1667), thousands of workers employed and 44,000 cubic meters of travertine, transported from Tivoli (30 km from Rome) by land and pulled by horses and bulls along the banks of the Tiber River.

Bernini designed an oval square, closed by two semicircular colonnaded porticoes to materialize the embrace of the Church to the faithful, but also (as Bernini himself said) “to the heretics to reunite them to the Church and to the infidels to enlighten them to the true faith“.

The colonnade of Doric order was erected by Bernini in grandiose and monumental forms, with 284 columns 16 meters high, arranged to create three parallel rows: the diameter of the columns gradually increased outward to correct the distortion of proportions given by the distancing. The colonnade was crowned by the coats of arms of Pope Alexander VII and by 140 statues of Saints more than three meters high, sculpted by Bernini’s students.

In order to amaze the spectators with his architectural precision, Bernini placed on the floor of the square, between the obelisk and the two lateral fountains, two stone disks with the words “center of the colonnade“ written on them: they were the two foci of the ellipse, so that whoever stood on them could see the four rows of columns perfectly aligned, as if they were one.