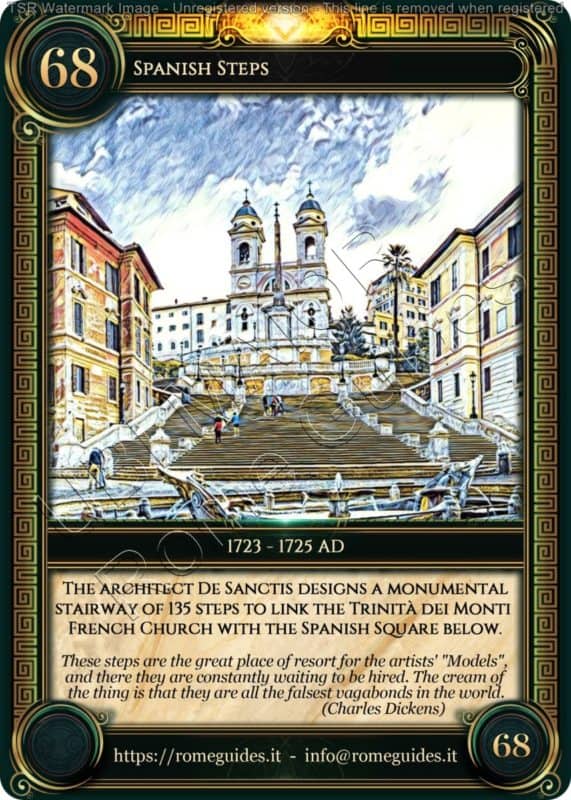 Between the 16th and 17th Century, the idea of connecting the slopes of the Pincian Hill, under French influence and dominated by the Church of the Holy Trinity, and the underlying Square of Spain, which took its name from the Palace of Spain, was discussed several times. The neighborhood, rich in hotels and guest houses, had become the meeting point of foreign artists and intellectuals.

Already in 1564 the church was indeed connected to the Square of Spain by an escarpment flanked by numerous elms, but the solution did not satisfy anyone, because often among the branches were hidden brigands ready to rob pilgrims and even couples looking for a secluded place for their obscene acts.

At the beginning of the 18th Century, Pope Benedict XIII commissioned architect Francesco De Sanctis to carry out a work that would enhance the city. He developed the idea of a majestic staircase decorated with numerous garden-terraces, taking as an example the pre-existing Port of Ripetta with its “waves” of steps, in a game of ramps that joined and divided in cascades.

The sumptuous and aristocratic staircase, placed at the apex of a long road that led to the Tiber, was designed so that the scenic effects would gradually increase as it approached: it was a succession of flights of 12 steps each, for a total of 135, with a large terrace in the middle from which the last two flights of stairs departed, ending in the top balustrade from where you could enjoy a splendid view of the city.

In reality, the architect De Sanctis wanted to embellish the staircase with numerous statues, but this last step was never realized. The staircase was inaugurated by Pope Benedict XIII on the occasion of the Jubilee of 1725 and, even though it was not actually accessible until the following year, it immediately became one of the main meeting places of the city.