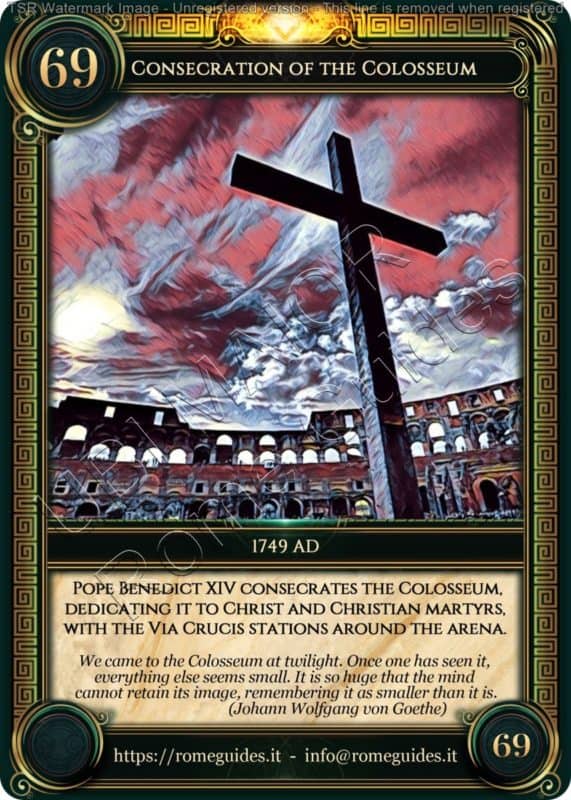 CONSECRATION OF THE COLOSSEUM

During the 17th Century, several Popes promoted the idea of consecrating the Colosseum as a place of worship, also in order to remove the rampant crime from the surrounding area, preventing improper use and containing the process of degradation. Thus in 1675 Pope Clement X proposed to solemnize the Jubilee in the Colosseum, consecrating the monument to the memory of the martyrs: a cross was raised in the center of the arena and the mural painting reproducing the city of Jerusalem was made on the arch at the bottom of the so-called Triumphal Gate.

In the same years the project for the construction of a small temple in the center of the arena was also started, at first commissioned to the architect Gian Lorenzo Bernini and later drawn up by his assistant Carlo Fontana: it was a monumental sanctuary with a circular plan, set on the major axis of the ellipse and integrated with a perimeter portico. Even this project, of which the preparatory drawings remain, from which models were taken, was not realized and at least until the middle of the 18th Century the Colosseum was used as a quarry for materials.

In 1744, however, Pope Benedict XIV issued an edict forbidding the profanation of the monument and in 1749, to the astonishment of the Roman citizens, he declared the Colosseum “a church consecrated to Christ and to the Christian martyrs“, placing a new cross in the center of the arena. The dedication, linked to the belief (probably erroneous) that many Christian martyrs had faced their martyrdom in the Colosseum, finally put an end to the despoliation of the monument that in the Middle Ages and in the following epochs had been systematically used as a stone quarry.

Then, in 1750, the Pope Benedict XIV had the 14 aedicules of the Way of the Cross built around the cross, along the perimeter of the arena, defined by the Pope as “the matrix of every other Way of the Cross in the world“.