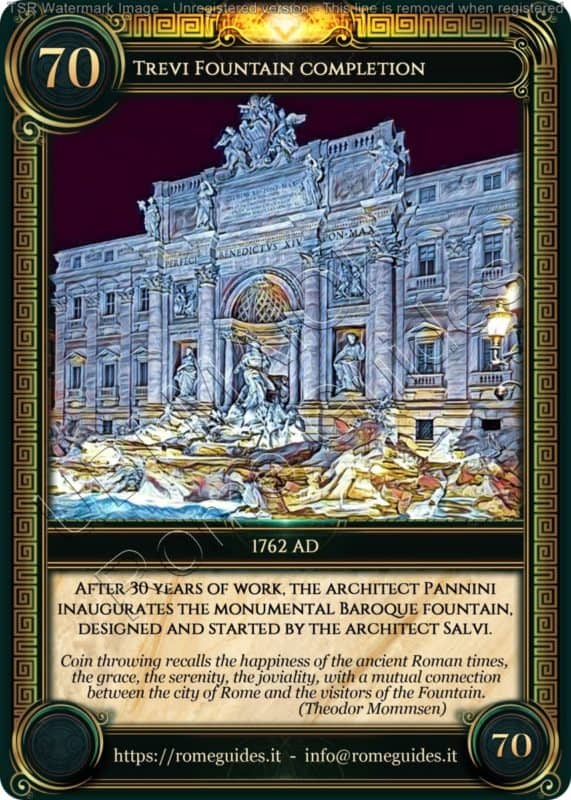 The history of the Trevi Fountain was always closely linked to that of the restoration of the aqueduct of the Virgin Water, which dated back to the time of Emperor Augustus and was inaugurated by Augustus’ son-in-law, Marcus Agrippa.

Although compromised and reduced in capacity after the damage caused in 537 AD by the Goths of Vitige, the Virgin Water remained in use for all the Middle Ages. After several minor interventions, an important restoration of the aqueduct was carried out in 1570 by Pope Pius V, who reconnected the original springs.

After a series of never carried out projects, around 1640 Pope Urban VIII ordered to Gian Lorenzo Bernini a “transformation” of the square and of the fountain, in order to create a new scenographic nucleus near the family palace (Barberini Palace). Bernini enlarged the square and demolished some hovels, but the death of Urban VIII in 1644 led to the abandonment of the project. The same destiny happened, forty years later, to the projects of the architect Carlo Fontana: the question of the Trevi Fountain was becoming a critical point in the city planning evolution of Rome.

In 1731, Pope Clement XII announced an important competition for the construction of a monumental fountain in the square, to the great disappointment of the Dukes of Poli, owners of the building on which the fountain was to be placed, who would have seen the façade of their palace diminished by two lines of windows. Clement XII did not listen to their arguments and entrusted the project to the architect Nicola Salvi, loving his idea of mixing baroque and neoclassicism, which took up the basic idea of Pope Urban VIII and Bernini, and appreciating above all the fact that the project was the cheapest of all.

The death of the architect Nicola Salvi, in 1751, caused further delays. The project was then entrusted to Giuseppe Pannini, assisted by the sculptor Pietro Bracci, author of Ocean and of the Two Tritons, the main sculptures of the decoration. The fountain was finally completed after the execution of the central sculptural complex, during the pontificate of Pope Clement XIII: on the evening of Sunday May 22th 1762, after thirty-one years of work, the work was finally presented to the public in all its majesty, thanks to the third inauguration by three different Popes.