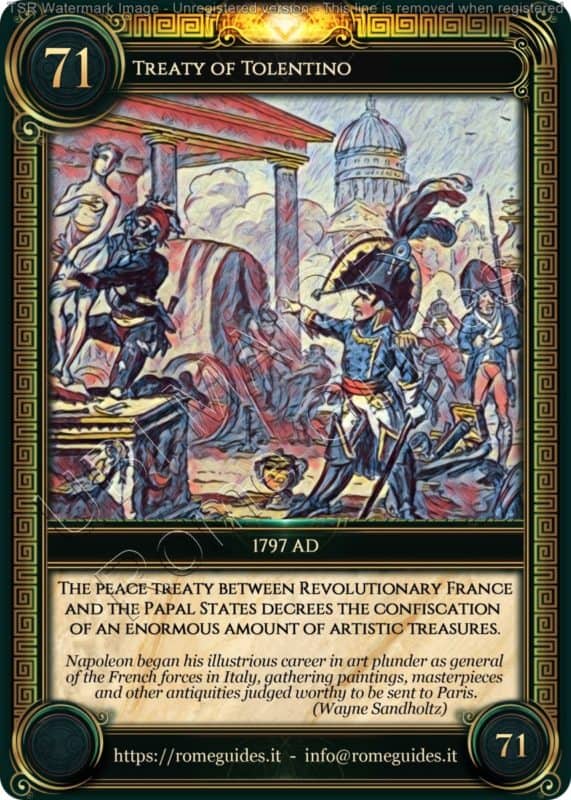 On February 19th 1797 the Treaty of Tolentino was signed between the French Republic, represented by the general Napoleon Bonaparte, and the Pope Pio VI, whose troops had been defeated by the French ones. The negotiations were not easy at all: Napoleon immediately gave the Pope the alternative of submitting completely or having to suffer the consequences of the resumption of hostilities. In the 26 articles of the Treaty it was contemplated the demobilization of all the papal militias, the definitive cession to France of the city of Avignon and of a series of other territories, the occupation of Ancona until the conclusion of the peace and above all the payment not only of 31 million liras, but also the delivery of an impressive quantity of works of art.

After hearing the opinion of a congregation of cardinals, Pope Pius VI ratified the Treaty. On an artistic level, it was a real tragedy: works of incomparable value were brought to Paris, including the Laocoön and the Apollo of Belvedere from the Vatican Museums, the Spinarius and the Capitoline Brutus from the Capitoline Museums, as well as colossal ancient statues that adorned Villa Albani.

Transported on wagons from Rome to Livorno, then by sea to Marseilles and then towed along the Rhone River and other canals to Paris, the works formed a gigantic procession of twenty-nine wagons, followed in a sort of parade by bears, camels and dromedaries. In addition to the extraordinary Roman antiquities, wonderful paintings stood out, including Raphael’s Transfiguration and Caravaggio’s Deposition.

Rome suddenly found itself much poorer.