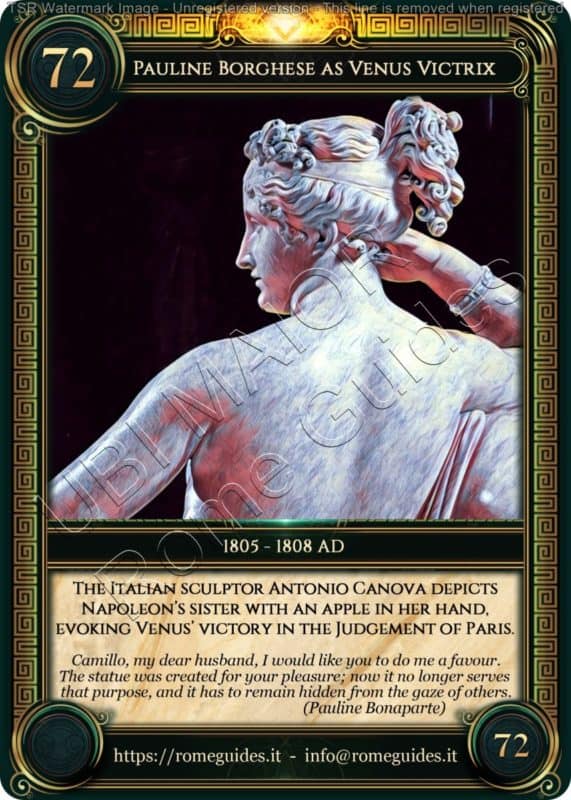 An iconic masterpiece of neoclassical art, the sculpture of Pauline Borghese was commissioned by Prince Camillo Borghese to the sculptor Antonio Canova in 1805 and was completed in 1808.

Camillo Borghese had married Pauline Bonaparte, Napoleon’s beautiful and vivacious sister, in 1803 in Paris. Pauline was 23 years old and already a widow: her first husband, the general Leclerc, had died of a tropical disease in the Dominican Republic where Napoleon had sent him on an unfortunate military expedition. Camillo married her without even waiting for the end of her year of widowhood and they moved to Rome to the Borghese Palace, where Pauline could resume the life of pomp and entertainment that she loved so much.

Although the marriage was not particularly happy, Camillo called the most illustrious artist of the moment to make a portrait of his beautiful wife. Antonio Canova was in fact considered the greatest European exponent of Neoclassicism in sculpture and for this reason he was nicknamed “the new Phidias“.

There were many gossips that flourished about the nudity of the sculpture and the possibility that the princess had posed undressed for the artist (she would have said maliciously “every veil can fall before Canova“): however, it was probably an ideal portrait, with Pauline represented as Venus, winner of the judgment of Paris, as indicated by the apple held in her hand.

Canova expressed all his skill in the creation of this neoclassical masterpiece. The pose of the princess, softly lying on a mattress made in a very realistic way, referred to the classical repertoire, the Etruscan and Roman sculptures lying on sarcophagi, but also to the tradition of 16th Century Venetian painting, specifically to Titian’s Venus.

Antonio Canova’s statue was immediately considered a perfect example of classical beauty and formal balance, inspired by Greco-Roman statuary, with soft and sinuous forms. For his artistic talent, Canova was defined as “the last of the ancients and the first of the moderns“.