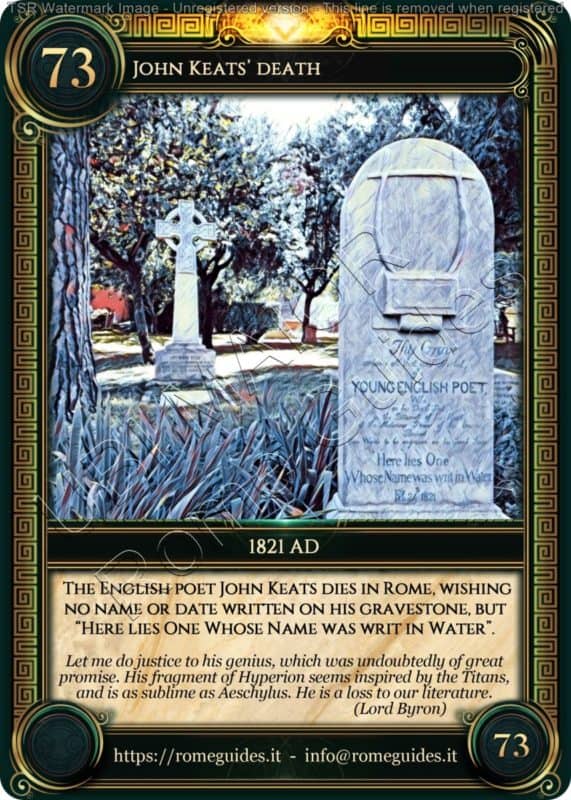 The great English poet John Keats, one of the most famous poets of the Romantic era, left London on September 13th 1820, together with his dear friend Joseph Severn, to embark on the brig Maria Crowther directed to Italy: the purpose was to decisively improve John Keats’ poor health, thanks to the mild and temperate climate of Rome.

The fate, however, seemed adverse: during the trip, a furious storm struck the boat during the journey to Naples, where Keats was subjected to a strict quarantine for ten days because of a suspected cholera epidemic that seemed to have broken out in England.

Finally, on November 14th 1820, John Keats reached Rome, moving to live near the Spanish Steps. Despite the transfer, the poet felt death looming over him and found consolation in poetry, stating that he could not “exist without poetry“, considered the only way to defeat death and live eternally. Unlike Percy Shelley and Lord Byron, Keats was never involved in the political situation of the time, preferring nature, art, the Middle Ages and ancient Greek culture.

Despite the abnegation and devoted care of Joseph Severn and Dr. James Clark, however, Keats slowly began to fade due to the tuberculosis that had plagued him for years, dying on February 23th 1821 when he was just 25 years old.

On his grave Keats did not want written neither the name nor the date of death, but simply a short epitaph, which reads: This grave contains all that was mortal, of a young English poet, who on his death bed, in the bitterness of his heart, at the malicious power of his enemies, desired these words to be engraven on his tombstone: “Here lies one whose name was written in water”.