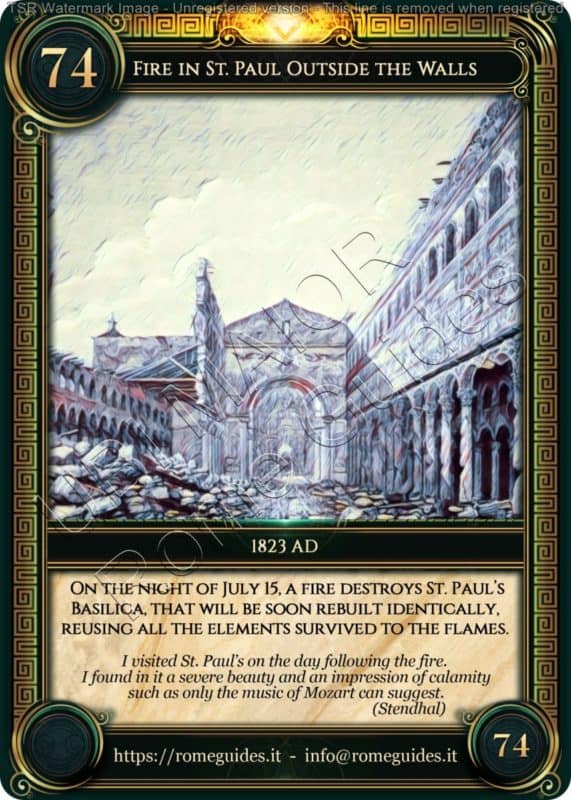 FIRE IN ST. PAUL OUTSIDE THE WALLS

In 1823, the Basilica of St. Paul Outside the Walls, one of the four Papal Basilicas of Rome and the second in size after St. Peter’s Basilica, was subject to a number of restorations, made necessary to permanently repair the roof and thus solve the problem of water infiltration that affected the Basilica during the rains.

On the evening of July 15th 1823, however, a very serious event occurred: a tinsmith who was carrying out restoration work forgot to turn off the fire he had used to light himself. Left unattended, the fire turned into a colossal blaze, which quickly spread throughout the Basilica.

It took the fire brigade over two hours to reach the Basilica of St. Paul, at which point stopping the fire was a desperate task.

The flames lasted more than five hours and most of the Basilica was destroyed: only the transept and the apse remained standing, saving the ciborium by Arnolfo di Cambio (one of the main examples of medieval art in Italy), the Easter candelabra and the cloister.

Despite the extreme gravity of the news, Pope Pius VII was not notified: a few days earlier, indeed, the elderly Pontiff had fractured his femur due to a fall and was in agony, and therefore it was decided to keep him unaware of what had happened. The Pontiff died the following August 20th.

Under the new Pope Leo XII the reconstruction of the Basilica began: despite the lively debate on the issue, it was decided to rebuild the Basilica of St. Paul in a faithful way compared to how it was before the tragic fire.