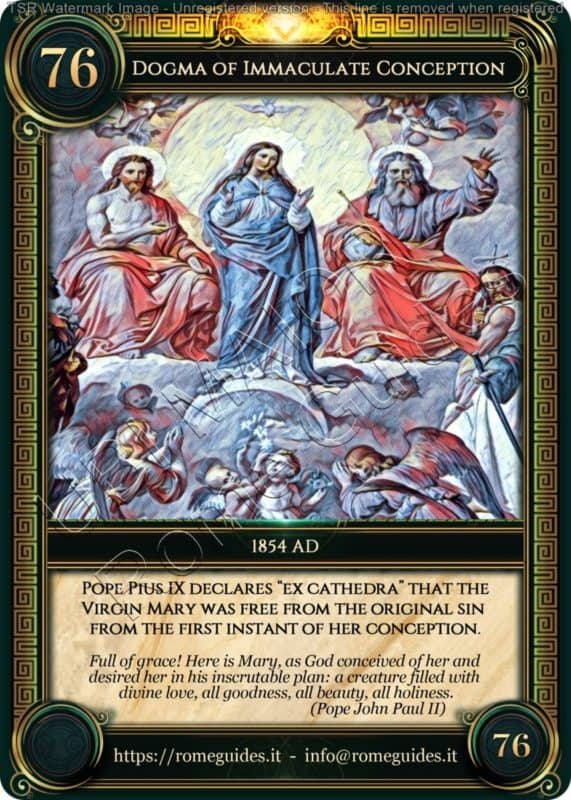 On December 8th, the Church celebrates the solemnity of the Immaculate Conception of the Blessed Virgin Mary: this is the dogma which establishes that the Virgin Mary was never touched by original sin, from the first moment of her conception.

The dogma was proclaimed on December 8th 1854 by Pope Pius IX with the Bull “Ineffabilis Deus“, in which the Pontiff included also a famous expression: “The blessed Virgin Mary since the first instant of her conception, by a singular grace and privilege of Almighty God, in anticipation of the merits of Jesus Christ Savior of the human race, was preserved intact from every stain of original sin“.

The Pope declared that during his forced exile in Gaeta he had made a vow: should he have received the grace to return to Rome, he would have committed himself to the promulgation of this dogma. The explanation given by the Pontiff was very explicit: God, with all humanity at his disposal, had chosen Mary to be the Mother of his Son. In this sense, she had to have been conceived as immaculate in order to fulfill this mission, she was conceived immaculate, preserving her from original sin from her conception.

Following the proclamation of the dogma of the Immaculate Conception, Pope Pius IX decided to celebrate the event by commissioning a commemorative monument and a cycle of frescoes. The column, erected in the Mignanelli Square and inaugurated on December 8th 1857, was surmounted by a beautiful statue of the Virgin Mary sculpted by Giuseppe Obici.

For the cycle of frescoes, on the other hand, the large room adjacent to Raphael’s Rooms was chosen and the task was assigned to the purist painter Francesco Podesti, who worked with his assistants from 1856 to 1865, designing an admirable decoration that had its culmination in the fresco of the Proclamation of the Dogma, set in the Basilica of St. Peter.