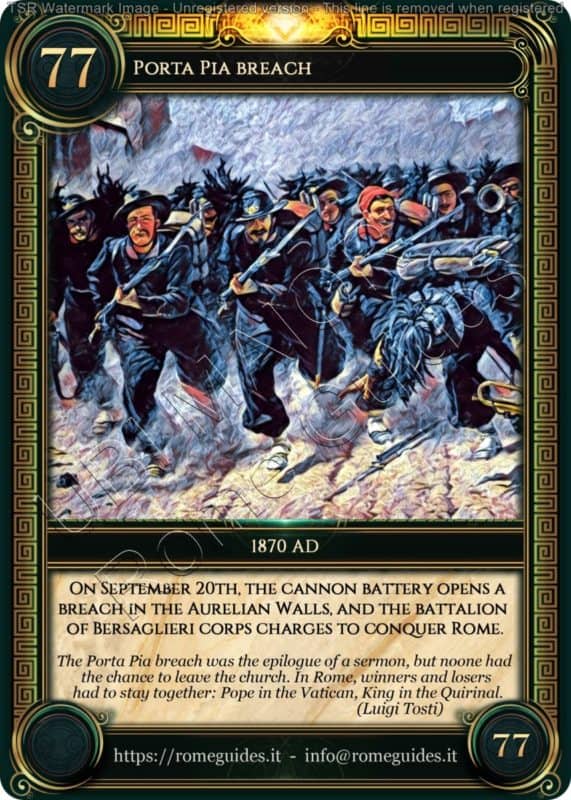 In Rome, at dawn on September 20th 1870, about 15,000 papal soldiers, mostly zouaves (volunteers almost all of French, Belgian or Dutch origin) were ready to face the actions of the besiegers, bersaglieri and infantrymen of the Italian army who had been waiting for days for the declaration of surrender of the Papal State.

At 9.00 am the signal given by the Piedmontese general Raffaele Cadorna was heard. Then, the roar of the cannonade and the sound of the collapse of the section of wall that stretched a few dozen meters from Porta Pia spread through the air. Indeed, the defenders did not resist: the temporal dominion of the popes ended after more than a thousand years.

A young officer (and promising writer) of the Royal Army noted at that juncture: “Porta Pia was all smashed; the only image of the Madonna, which stands behind it, had remained intact; the statues on the right and left had lost their heads; the ground around it was strewn with piles of earth, weapons, beams and stones. Our regiments quickly entered“. The officer’s name was Edmondo De Amicis, the man who would later achieve fame with his novel Cuore.

So it was that, on a September morning, the army achieved, almost effortlessly, what had seemed, only a few years before, only a dream or a mirage. A few weeks earlier, the Prussia of Bismarck had gone to war against the France of Napoleon III, the greatest protector of papal rule over Rome. The French troops had to abandon Rome, leaving the papal strongholds unprotected.

With the French protection gone, Pius IX had no choice but to take refuge in the Vatican and declare himself a political prisoner of the Italian State. Italy thus found its capital, but, on the other hand, the “Roman Question” exploded, with a harsh contrast between laymen and Catholics.