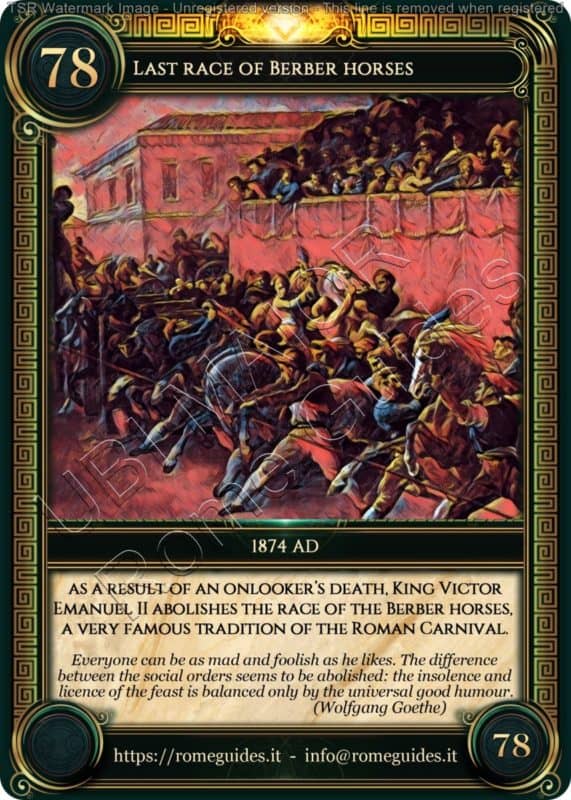 The Roman Carnival had a long tradition of tournaments and races when in 1462, with the election to the papacy of Pope Paul II, the current Via del Corso, then Via Lata, was specially improved. Of all the races of the Roman Carnival, the Berber horse race was the main event.

The “shaken” horses were grouped under the obelisk in the People’s Square, next to which were built stands from which the richest and most powerful people of the city could watch the start of the race. The other people rented seats along Via Lata to watch the race. The balconies overlooking the street, adorned with drapes and brocades, were crowded with people throwing flowers and sugared almonds to strangers. The less fortunate, however, were forced to crowd on the slopes of the Pincio Hill.

In the moments that preceded the departure, the horses were held by the Barbareschi (today’s stablemen) with difficulty, because they were struck and annoyed by pins inserted in pitch balls that were attached to their rump. When the gunshots were heard, everyone knew that the race had begun.

The horses were launched along Via del Corso towards the Venice Square, where a large banner suspended in the air marked the end of the route. The arrival and the “capture” of the horses, shaken, frightened and not at all inclined to stop in front of the people were remembered as extremely spectacular moments for that crowd eager for strong emotions.

Many nobles, royalty, artists and travelers flocked to Rome for the race and left traces of it in their writings until the unification of Italy when, in 1874, Vittorio Emanuele II decided to abolish this event forever because of the death of a young man, who was watching the race and was run over and killed. This choice of the Savoy marked the beginning of the decline of the Roman Carnival.