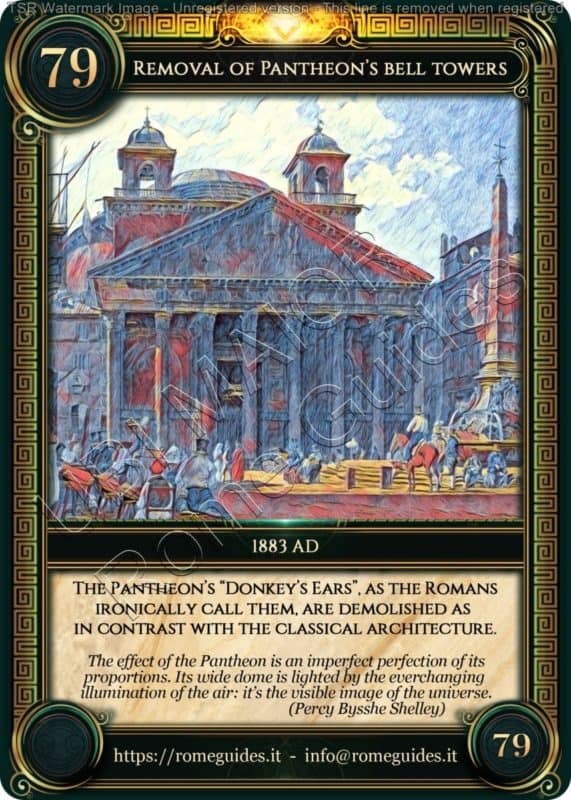 The Pantheon, the most important and best preserved of the temples of Ancient Rome, underwent over the centuries restorations, modifications and spoliations, in many cases very unwelcome to the Roman people.
One of the most unfortunate protagonists of these symbolic insults to the monument symbol of the Roman engineering was the great baroque architect and sculptor Gian Lorenzo Bernini.

In the 17th Century, on the orders of Pope Urban VIII, Bernini had to remove the bronze coverings of the portico, in order to use them in part for the construction of the Baldacchino in St. Peter’s Basilica and in part for the casting of some cannons for the fortress of Castel Sant’Angelo. This episode, together with the various spoliations of construction materials that in those years were perpetrated by the Pope on the monuments of Ancient Rome, gave rise to the saying: “Quod non fecerunt Barbari, fecerunt Barberini” (What the Barbarians did not do, the Barberini did), playing on the assonance between the name of the Pope’s family (Barberini) and the barbarian invaders who destroyed the Roman Empire.

This was not, however, the only time Bernini was much criticized for having anything to do with the Pantheon. Having been turned into a church in 609 AD, the Pantheon needed, according to the Pope, two small bell towers on top of it in order to accentuate the clerical character of the structure. Bernini had to design and lead the works for the construction of two bell towers on the sides of the tympanum of the pronaos, but they were immediately disliked by the citizens because they were completely unrelated to the original architecture of the monument.

The Roman citizens, with their usual irony, nicknamed them “donkey’s ears“, and the great rival of Bernini, the architect Francesco Borromini, did not hesitate to point out to his antagonist the resounding failure by attaching marble donkey ears in front of the windows of his house, as a sign of mockery.

In 1883, the minister Guido Baccelli finally demolished the hated bell towers, to the satisfaction of the Roman people.