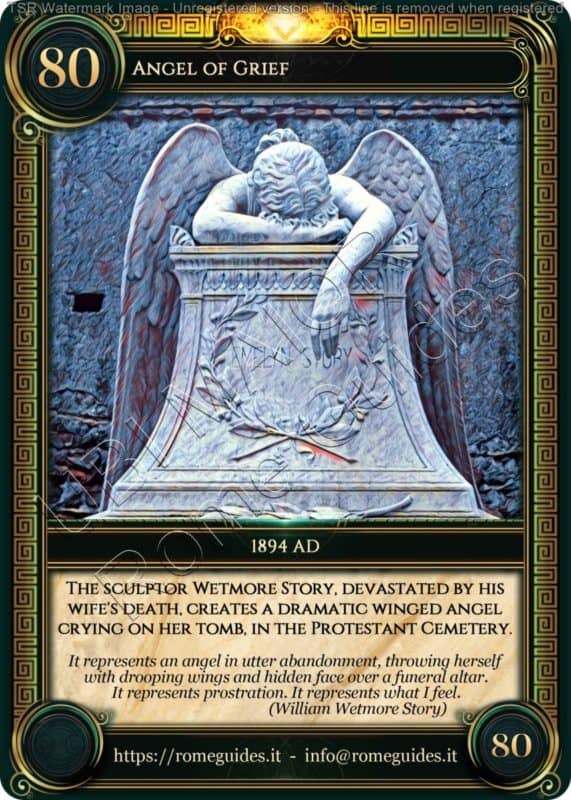 William Wetmore Story was an American jurist, writer and sculptor who lived for a long time in Italy, his beloved adoptive land. He was born in 1813 in Salem (Massachusetts), but in 1850 he settled in the Eternal City, where at the Barberini Palace he wrote some of the most influential articles concerning the American Civil War, which was in progress in those years.

In spite of his ability as a writer, the field that made him famous to posterity was certainly sculpture, in particular thanks to the Angel of Grief, his masterpiece, a funerary monument that is located at the Acatholic Cemetery in Rome. The work was not made on commission, as were many other sculptures of the artist, but it was sculpted in 1894 to remember his beloved wife, Emelyn Eldredge Story, and their son Joseph, who died prematurely at only six years of age.

The angel is sculpted slumped, with his wings elegantly stretched out to the sides of his body: he is portrayed as if he had reached the end of his journey, with his legs and feet still in a dynamic pose, but with the upper part of his body now abandoned to despair.

The left hand of the Angel dangles lifelessly from the little wall that supports him, and he has dropped an olive branch to the earth, scattered symbol of peace, resurrection and life. The wings in particular, which would symbolize glory if they were unfolded and stretched towards the sky, are closed on the marble, betraying a deep sense of discouragement and emptiness, a true symbol of the loss of hope.

In this work of his, William Wetmore Story managed to show all the pain for the idea of the loss of his beloved wife and his little son of six years old in a sculpture that has become one of the most famous funerary monuments of the world.