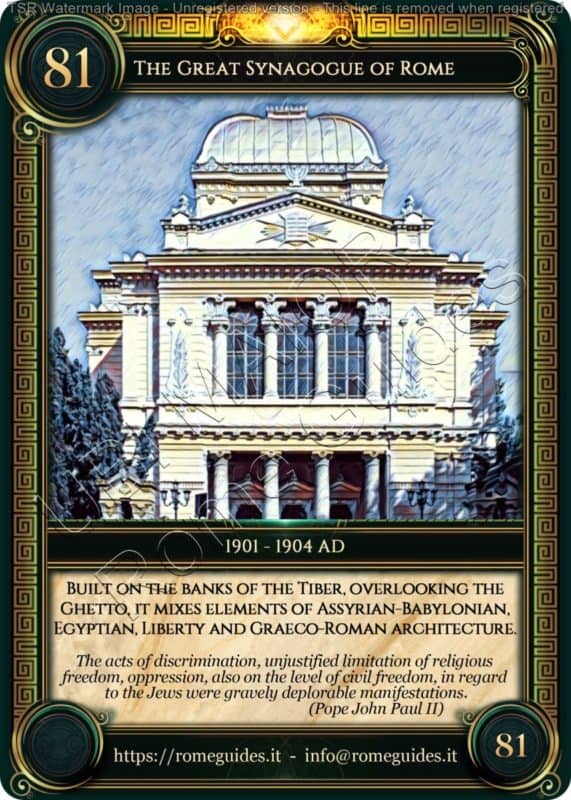 THE GREAT SYNAGOGUE OF ROME

The history of the Jewish Synagogue of Rome is linked to the political and social transformations that changed Rome and Italy after 1870: indeed, only after the independence of the city from the Papal State and the transformation in Capital, the Jews were equalized in civil rights to other citizens. The construction of a new Synagogue represented at the same time the symbol of emancipation and a new monument for the city. In 1889 a competition was called and it was won by the architects Vincenzo Costa and Osvaldo Armanni, who designed a building that “would take on severe and simple forms, but not without a moderate richness and in perfect harmony with those of the other monuments“.

The works, started in 1901, ended with the inauguration on July 1904. The Synagogue was designed with a Greek cross plan oriented to the east, towards Jerusalem, surmounted by a translucent aluminum pavilion dome illuminated by twelve windows in the drum. The style chosen by the architects can be defined as “eclectic”, with influences ranging from the Greek to the Assyrian-Babylonian tradition.

The interior was elegantly painted by Domenico Bruschi and Annibale Brugnoli with geometric and floral motifs in compliance with the biblical prohibition of human representations: the dome is painted with the colors of the iris, interspersed with palms and cedar trees, while the rest of the ceilings were decorated with starry skies.
In the gardens around the Synagogue were planted trees related to the biblical tradition as the palm, olive and cedar.

The Synagogue represented in a tangible way the deep link between Jewish culture and the city of Rome, sharing the historical and social changes that have occurred over the centuries.