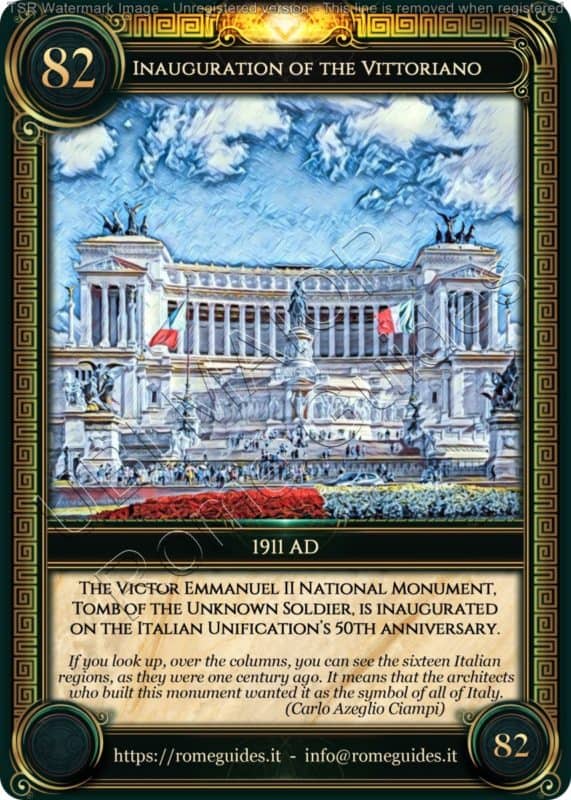 INAUGURATION OF THE VITTORIANO

In 1878 it was decided to erect in Rome a colossal permanent monument dedicated to Victor Emmanuel II, who was the first King of Italy and who brought to completion the process of Italian unification, so as to be nicknamed by historiography as “the Father of the Fatherland“.

At the end of very long works, in some cases particularly contested by the Roman citizens because of the urban gutting necessary for the construction of the colossal monument, the Vittoriano was inaugurated in front of a huge crowd on June 4th 1911, during the celebration of the fiftieth anniversary of the Unification of Italy, in the presence of King Victor Emmanuel III.

The ceremony was also attended by the Queen Elena, the Queen Mother Margherita of Savoy and the rest of the royal family. There were also the Prime Minister Giovanni Giolitti, the six thousand mayors of Italy, several veterans of the Risorgimento wars of independence holding the Italian flags and three thousand students from Roman schools.

The climax of the inauguration was represented by the solemn unveiling of the cloth that covered the equestrian statue of Victor Emmanuel II, a gesture that was performed after the order issued by King Victor Emmanuel III. Shortly before, Giovanni Giolitti had delivered the official inauguration speech, the opening part of which read: “On this hill that recalls the glories and greatness of Rome, the National Monument is inaugurated, which in the effigy of the Father of the Fatherland summarizes the memory of the struggles, sacrifices, martyrs and heroism that accomplished the resurrection of Italy“.

The climate lived during the ceremony of inauguration of the Vittoriano was characterized by an intense unitary and national spirit, but despite this conciliatory atmosphere there were some voices out of the chorus, among which the Socialists and the Republicans, critical towards this ceremony because of the unquestionable monarchical connotations characterizing the monument.