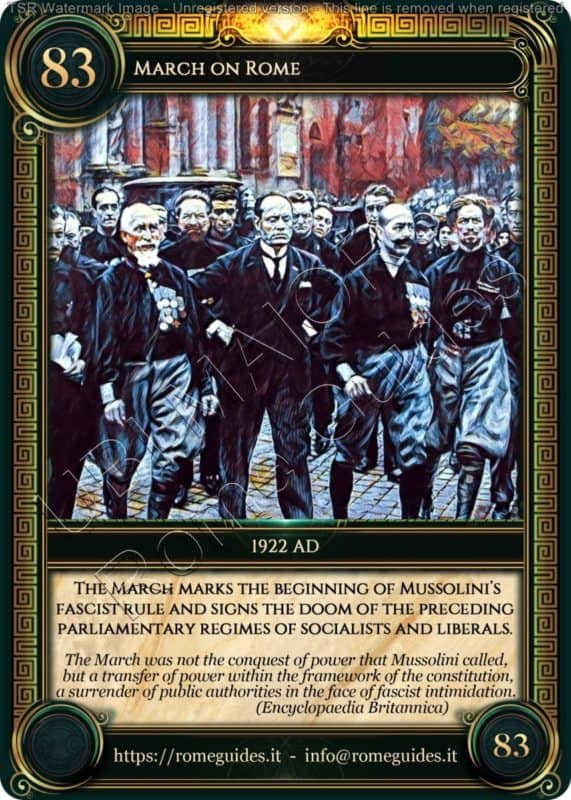 Following the policy of the “double track”, combining the practice of squadrism with the political compromise, the leader of the Fascist Party Benito Mussolini effectively implemented a new tactic of conquest of power by means of a “conservative revolution” of semi-legal forms.

After a first meeting of squadrists which took place in Naples on October 24th 1922, and while the liberal leaders remained hesitant and divided, on October 27th the attack of the Fascist militias began in various Italian Provinces, with the capture of a series of Prefectures.

Then, on the night between October 27th and 28th, the Fascist squads began to march towards Rome, in spite of the weak resistance encountered in Civitavecchia and Orte. At 5:00 a.m. of the morning of October 28th, the Italian government headed by Luigi Facta decided to proclaim a State of Siege, but King Victor Emmanuel III refused to sign the decree. This hesitation turned out to be fatal, giving the green light to Mussolini’s ambitions.

Following Facta’s resignation, the task of forming a new government was entrusted to Antonio Salandra, and the hypothesis of a Salandra-Mussolini government was outlined, which many capitalists also looked with favor, but the Fascist Party declared that the “only acceptable political solution was a Mussolini government“. A few hours later, while the Fascists occupied Rome, carrying out their armed march inside the city, King Vittorio Emanuele III entrusted the task to Mussolini, who left Milan that same evening and arrived in Rome on October 30th to formally receive the appointment.

With the formation of his government, the long twenty years of Fascist dictatorship began.