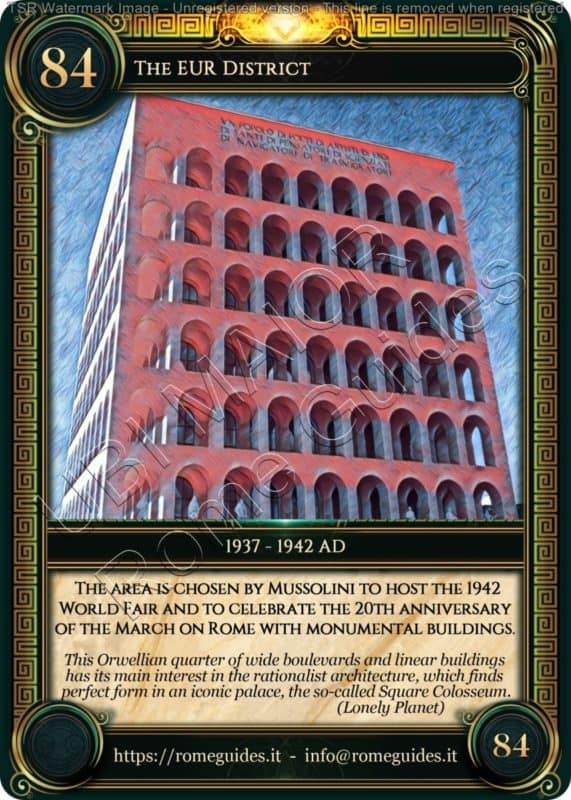 The EUR District, an acronym for Universal Exhibition of Rome, is an urban and architectural area of Rome, strongly requested by Benito Mussolini in anticipation of a Universal Exhibition that never took place due to the outbreak of World War II. The Exhibition, which was to be held in 1942 on the occasion of the twentieth anniversary of the March on Rome (the original name of the District was indeed E42), was a great opportunity for Italy, eager to show its luster and its progress in front of the other world powers.

It was Mussolini himself who indicated the place where what he called “the Third Rome” was to be built. Six kilometers south of Rome, therefore, a permanent city would have risen, quite different from the usual Universal Expositions made up of temporary and dismountable pavilions. Mussolini, in a speech at the Capitol Hill in 1938, said: “the new pole is destined to remain for centuries, with buildings that will have the proportions of St. Peter’s and of the Colosseum and that will be dominated by a gigantic Roman arch, as a symbol of human will in the effort to achieve peace on a lasting basis“.

Mussolini therefore had in mind to design and create a sort of New Rome, a fascist city that through monuments, streets and buildings would represent the projection of a futuristic and modern Romanity. The main protagonist of the EUR project was the architect Marcello Piacentini who, through a rationalist and monumental architecture, had the task of eternalizing the New Rome through the grandeur of the buildings, mostly built with white marble and travertine to remember the temples and buildings of the Imperial Rome.

The center of the new District was to be the Palace of Italian Civilization, immediately nicknamed Square Colosseum for its structure that, although with different forms, recalled the famous monument of Ancient Rome. Sixty meters high, with its façades pierced by 216 arches, the building was to accommodate the statues of the most important Italian personalities, from Julius Caesar to Mussolini: the building was inaugurated, still incomplete, in 1940, and the project was never completed due to the outbreak of World War II, presenting today as decorations only 28 statues depicting the arts and human activities.