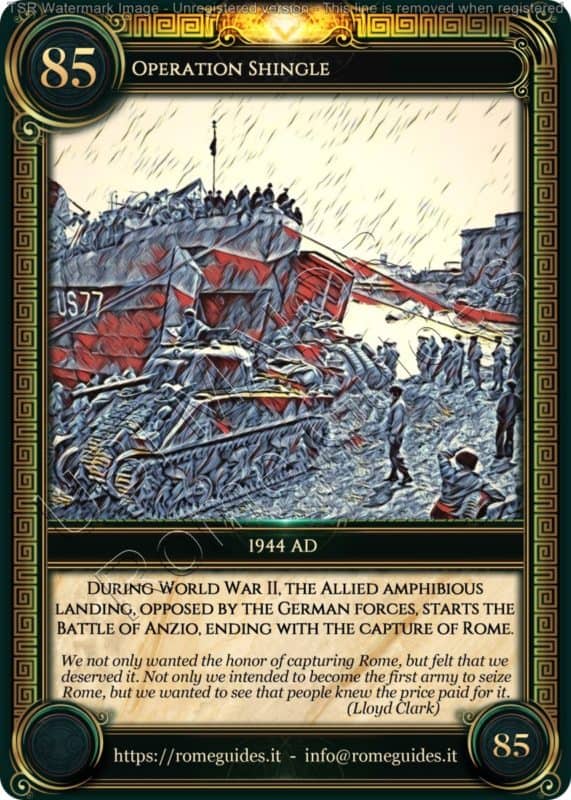 The Anzio Landing (codenamed Operation Shingle) was a military operation of amphibious landing, conducted by the Allies on the Tyrrhenian coast in front of the towns of Anzio and Nettuno, during the Italian Campaign in World War II.

The objective of this maneuver was the creation of a bridgehead at Anzio beyond the German deployment on the Gustav Line, in order to bypass it and force the adversaries to divert large forces from the Cassino front, thus allowing the breakthrough of the 5th Army along the Tyrrhenian sector of the Gustav Line. At the same time, the troops landed at Anzio would have occupied the Albani Hills, south of Rome, preventing the retreat of the German divisions, to conquer Rome and shorten the military campaign.

The landing took place successfully on January 22th 1944 by the American VI Corps, but in its entirety Operation Shingle did not achieve its initial objective: the German forces, despite the initial surprise, were able to block the initial advance of the Allies and to launch a series of counterattacks, which put the Anglo-Americans in serious difficulty and cost them heavy losses.

The long and exhausting positional battle that followed in the area of the bridgehead continued until the following spring, when the Germans were forced to retreat after the collapse of the Cassino front. Also in this case, however, the main objective, that was the destruction of the German forces in Italy, was not achieved and the retreating Germans were able to flee from the enemy’s grip and rearrange themselves on the Gothic Line, a bulwark that engaged the Anglo-Americans for months on the Apennines.