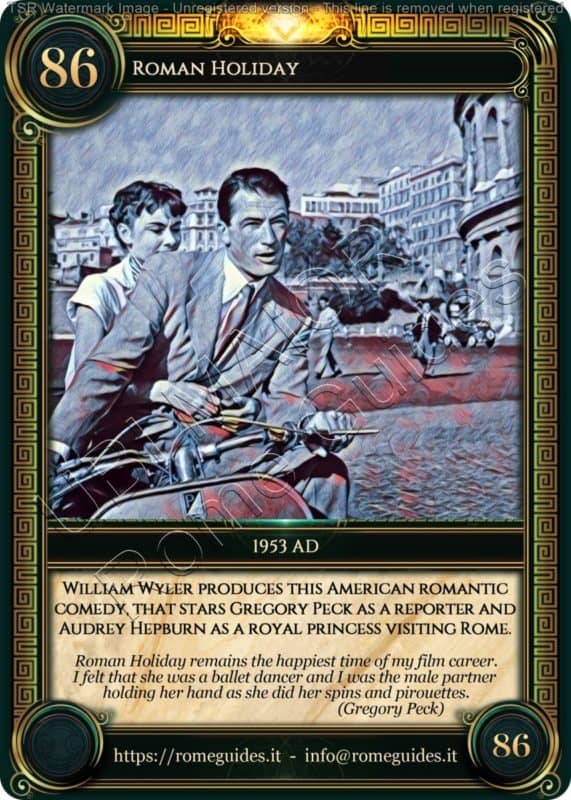 A TV newsreel announced the visit of the young Princess Anna to the main European capitals. The last stop was Rome, where, after a party at the embassy in front of all the institutional offices and exponents of the international nobility, the princess, exhausted and frustrated by her diplomatic commitments, had a nervous breakdown. The court doctor gave her a sleeping pill, but before this could take effect, Anna managed to escape from the palace hiding in a food truck.

She was found a short time later, lying down near the Imperial Fori, by the American reporter Joe Bradley, who, without having recognized her, tried in vain to put her in a cab that would take her home, and then decided to host her in his studio.

The next day, on his way to the editorial office of his newspaper, Joe saw a photo of the princess in the day’s paper and realized who the girl who was sleeping at his house really was. Joe then bet his boss that he would have an exclusive article on the princess for the next day and alerted a photographer.

After having been the perfect stage for the masters of Neorealism, Rome needed to rediscover its mythical, fairytale-like dimension and open up that joyful dimension that would later become characteristic of the Dolce Vita.

The Italian Capital was explored by William Wyler, director of Roman Holiday in 1953, in all its chaotic vitality without stereotypes or exaggerations. On the one hand, the movie showed a folkloristic and popular Rome, while on the other hand it highlighted the enchantment of the Eternal City, in a sweet fairy tale with a bitter aftertaste that reinterpreted Cinderella with the roles reversed.

The great protagonist of this story will be the fresh beauty of Audrey Hepburn, a young actress still little known who played the restless princess intrigued by life outside of palaces and embassies, flanked by the more mature and celebrated star Gregory Peck. The Oscar for Best Actress proved that director William Wyler was right, consecrating Audrey Hepburn in the firmament of the movie stars.