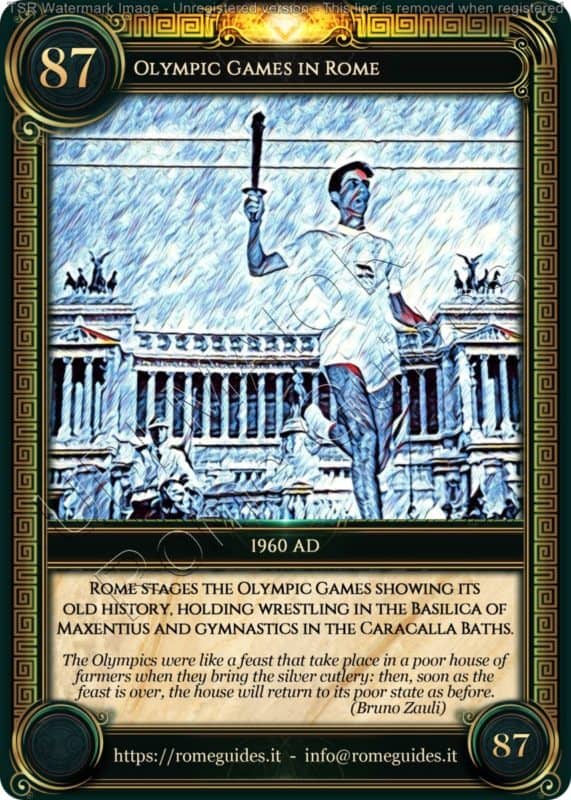 The ballot held in 1955 at the International Olympic Committee saw Rome beat Lausanne as the site of the 1960 Summer Olympics: the importance and charm of Rome could not be compared to those of the Swiss city, which, however, housed the headquarters of the Olympic Committee.

The return of the Olympics to Rome had a strong symbolic value, as the Ancient Rome had picked up the torch of Greek sports. If the architectural, monumental and historical treasures of Rome combined perfectly with the ancient tradition, the organizers had to face the enormous problem of equipping the city for the modern Games. The Italian Capital was, indeed, very antiquated and did not have adequate facilities: the only ones that existed were a legacy of the Fascism and even those, although in some cases of considerable value, had to be modernized, as the needs of 1960 were completely different from the needs of the pre-war period.

The Organizing Committee of the Games succeeded in this very costly work thanks to the wealth of CONI, to which the Italian government had granted the monopoly of football betting.

Thanks to the money collected from the bets, it was possible to carry out important works weighing only minimally on the state budget. No less than 50 million dollars were invested in the construction and renovation of the facilities and in the building of other infrastructures; the works were commissioned to the most famous architects and engineers of the time, and the architect Pierluigi Nervi was given the task of supervising the works.

One of the most complicated works was the modernization of the old Olympic Stadium, built in the Fascist period to hold 100,000 spectators. The capacity was a little reduced, but the renovated stadium was the heart of the Games, hosting the opening and closing ceremonies, as well as athletic competitions. With a few changes, but keeping intact the old Fascist construction, the adjacent Italic Forum became a sort of Olympic center, with a swimming pool for swimming and diving competitions, as well as some training facilities and for warming up the athletes.

mong the new works were the Velodrome, for 20,000 spectators, the Sports Palace for basketball competitions, with a capacity of 5000 spectators, and the Olympic Village, a few steps from the Sports Palace: its location just a couple of kilometers from the center of Rome represented a magnificent example of integration between the athletes and the inhabitants of the city. The athletes were not confined in an isolated area but could, in the short time free from competitive commitments and training, relax going to meet the city life.

The most difficult challenge that the architect Nervi managed to succeed was to integrate the modernity of the competitions in the architectural and historical charm of antiquity: the Baths of Caracalla were used for gymnastics tests, while the Basilica of Maxentius was the impressive stage for wrestling.