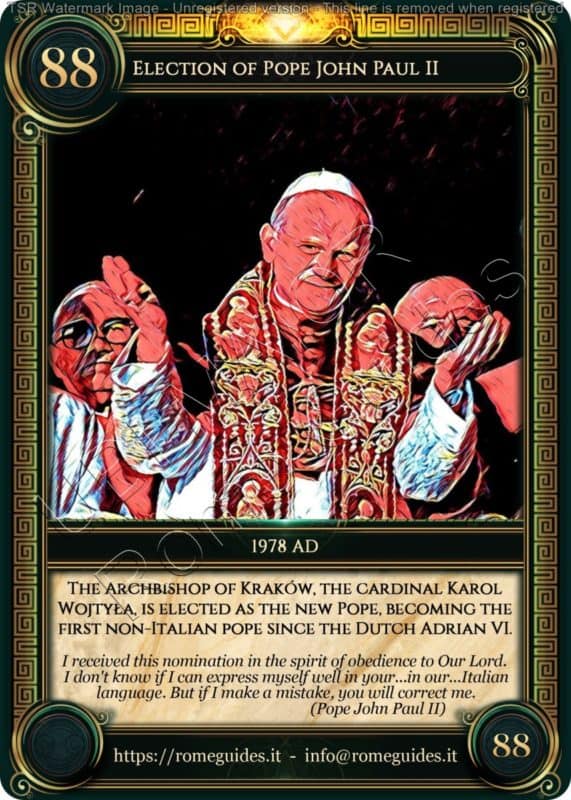 Out from the blue, at 5.30 am on September 29th 1978, the world cried out for Pope John Paul I, who was found dead in his bed from a heart attack after only 33 days of his pontificate.

On a dark and rainy October 4th, Rome and the entire world gave their final farewell to a Pontiff who, in a very short time, had however time to abolish some excessively lavish rites, retiring the papal tiara and throne. Thus, the Sede Vacante opened once again.

The Conclave that was inaugurated on October 14th 1978 saw as protagonists the same cardinals of the election of August. The favorites for the election were the Cardinal Benelli, Archbishop of Florence of progressive positions, and the Cardinal Siri, Archbishop of Genoa and labeled as a conservative. Cardinal Siri, however, made the mistake of giving an interview the day before the Conclave, outlining what looked like a real electoral program, partially undermining his own position.
The first votes saw a tug-of-war between Siri and Benelli which was impossible to break up.

Suddenly, the Cardinal Franz Konig of Vienna proposed a third credible option, nominating the Polish Cardinal Karol Wojtyła and affirming: “I believe that the rebirth of the spirit and of Christianity will come from the East“.

On the seventh ballot, on October 16th, Karol Wojtyla received about half of the votes. On the eighth ballot, that same evening, Wojtyła doubled his votes and garnered an overwhelming majority. After a long applause from the other cardinals, the Camerlengo Villot approached the newly elected and touched him on the shoulder and pronounced the canonical formula: “Acceptasne electionem de te canonice factam in Summum Pontificem?” (Do you accept your canonical election as Supreme Pontiff?). Then the new Pope looked up: “Obeying Christ my Lord in faith, abandoning myself to the most sweet Mother of Christ and the Church, aware of the great difficulties, I accept“.
“Quo nomine vis vocari?” (How do you want to be called?). He answered: “Because of my devotion to Paul VI, and affection for John Paul I, I will call myself John Paul II“.

The election of Wojtyła interrupted the centuries-long series of Italian popes, which had been succeeding each other for 455 years: the last foreign predecessor was Adrian VI of Utrecht, elected in 1522. At just 58 years of age, John Paul II was also the youngest cardinal elected since Pius IX: on that October evening, one of the longest and most extraordinary pontificates in the history of the Church began.