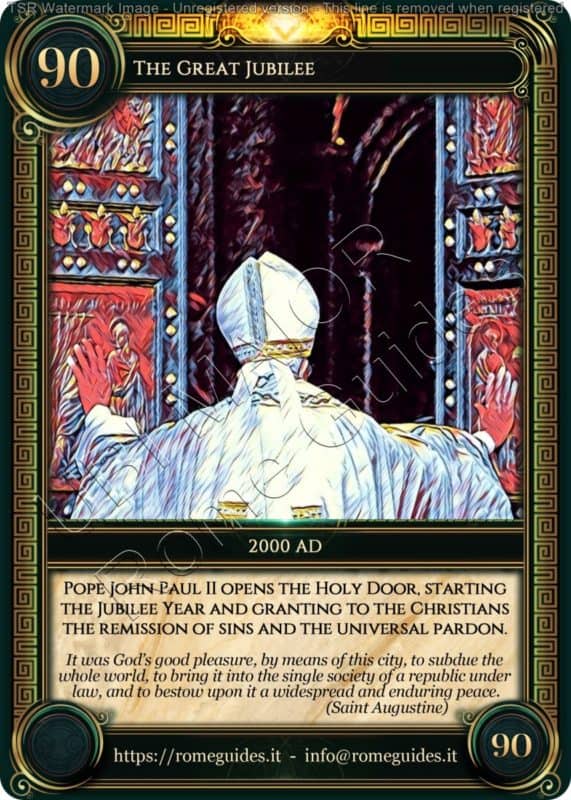 On December 24th 1999, a few minutes before Midnight Mass, Pope John Paul II began the Jubilee of 2000, one of the most successful in the history of the Church, with the opening of the Holy Door of St. Peter’s Basilica.

The Pope considerably simplified the opening rite compared to previous Jubilees, notably eliminating the demolition of the closing wall, which had instead been removed by workers in the previous days. After a series of prayers and hymns, John Paul II pushed open the doors with his own hands, while they were pulled from the inside by the assistants: at that point, he knelt in adoration on the threshold of the basilica, holding the crosier.

During the Jubilee of 2000, the Pope made several pilgrimages and symbolic gestures not included in the usual practices of the celebrations. On January 18th, he celebrated a mass in St. Paul Outside the Walls with an ecumenical celebration with twenty-two Christian churches from around the world: in the sermon, John Paul II hoped for “a not distant future in which Christians can again walk together as one people“.

Between February and March, John Paul II made a pilgrimage to the Holy Land, encouraging interreligious dialogue between the Catholic Church, Islam and Judaism.

On June 15th, the Pope dined in a Vatican Palace with two hundred poor people, giving them an envelope of money as a symbolic gesture.

The most impressive event of the Jubilee was probably the holding of World Youth Day, which took place in Rome between August 15th and 20th: more than two million young Catholics participated, and in the last two days they gathered in the Tor Vergata area for a long prayer vigil. On that occasion, Italian newspapers referred to the young people as “Papaboys“, an expression that has never fallen into disuse.