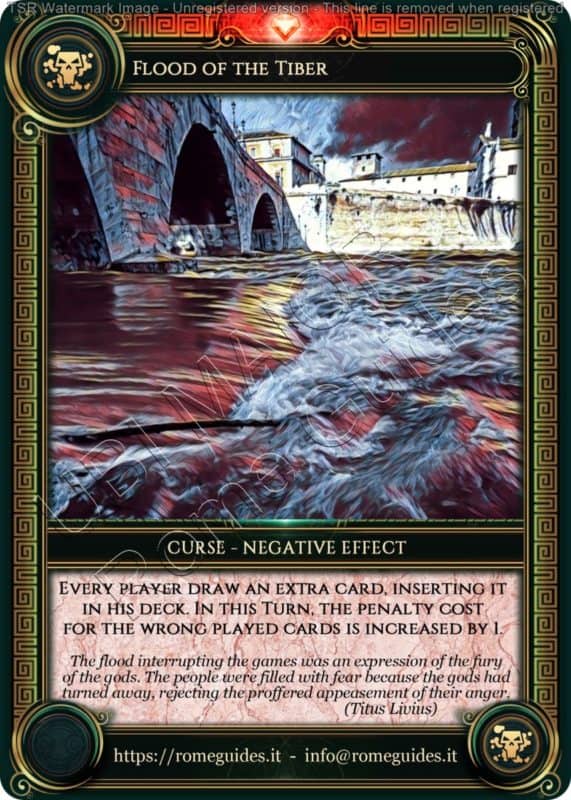 FLOOD OF THE TIBER

For centuries the floods caused by the Tiber have been a deadly threat to Rome: even today many tombstones on the walls indicate the level, sometimes very impressive, reached by the waters.

The flooding of the Tiber occurred since ancient times: the Roman historian Livy tells us that in 189 BC the Tiber flooded the area of the Campus Martius 12 times. In the imperial age were studied ways to try to solve the problem of floods: the Fiumicino Canal, built by Emperor Claudius near Portus at the mouth of the Tiber and then expanded by Trajan, had the aim to facilitate the release of water to the sea, thus reducing the pressure of floods in the urban area.

The 16th Century was characterized by tremendous floods: the most tragic were that of October 8th 1530, which caused 3.000 deaths and destroyed more than 300 houses, and that of September 15th 1557, with 3.000 deaths and very serious damages to churches and buildings. The deaths caused by the floods, moreover, did not end with the lowering of the waters: the areas close to the river continued to be bearers of disease and death for a long time afterwards, with famine and pestilence often following the floods.

Even the flood of 1637 was particularly destructive, but a precious artistic memory of it remains: according to tradition, Pope Urban VIII was so impressed by a boat that came to be stranded on the Spanish Steps following the flood, that he wanted to remain in perpetual memory by having Pietro Bernini, father of the more famous Gian Lorenzo, sculpt the famous Fountain of the Ugly Boat.

The most tragic flood of the modern era was certainly that of December 28th 1870, with the waters that exceeded 17 meters in height, a level that had not been reached for almost three hundred years. The victims and the damage caused by the flood so impressed Italy, which had just named Rome as its Capital, that the King Victor Emmanuel II rushed to the city and decided to take remedial action. Among the various projects presented, in November 1875 the one of the engineer Canevari was approved, which provided for the construction of retaining walls on the sides of the river: the works, started in 1876 and finished in 1926, were very effective, but involved the demolition of landscapes and architectural structures, such as the Leonine Port and the Port of Ripetta.