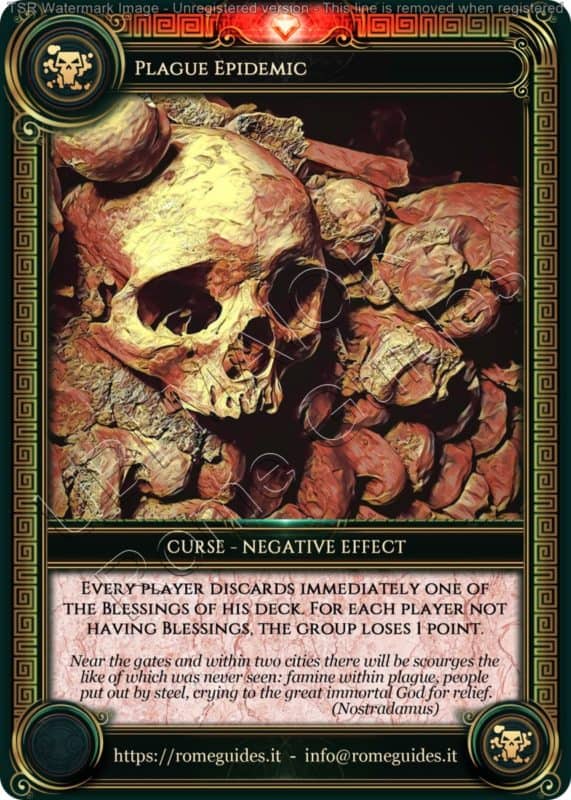 Although the chronicles speak of great plagues since the beginning of the Roman history (the best known around 291 BC, when the city was struck by an epidemic to counteract which was created on the Tiber Island a temple dedicated to Aesculapius, god of medicine), the first of which we have certain historical sources is the Plague Antonina, which broke out in 165 AD, just in the period of maximum development of the Roman Empire: it was probably caused by the smallpox that suddenly hit Rome, imported by the troops returning to the Empire after the war against the Parthians. The disease caused a very high number of deaths, including the Emperor Lucius Verus, who probably contracted it in 169 AD.

Finished the first wave, a second outbreak broke out nine years after the first, being much more virulent than the previous one: during the second epidemic, there were up to 2,000 deaths per day just in the city of Rome. At the end, in the territories of the Empire, it was counted a huge number of victims, estimated between 5 and 30 million, about a quarter of the entire imperial population. Even the death of Marcus Aurelius himself, which occurred in 180 AD, seems to have been caused by the epidemic.

The repeated epidemics that characterized the period from the 2nd to the 5th Century AD were certainly one of the causes of the fall of the Western Roman Empire.

Throughout the Middle Ages, Rome was less affected than other places by the great epidemics that ravaged Italy and the whole of Europe. The city, however, was not so lucky in 1656, at the outbreak of a new plague that had in the city of Naples its main hotbed. Unfortunately, doctors did not immediately understand what was happening and did not give any alert: it was only on June 14th, in front of the first suspicious deaths, that it was understood that the plague had arrived in Rome.
To try to take action, on June 19th a lazaret was set up on the Tiber Island where all those infected by the disease were quarantined. However, it was already late: the disease had spread throughout the area of Trastevere and even within the Jewish Ghetto. The measures decided at that point to adopt were very drastic: the Ghetto was immediately closed, without allowing anyone to move from there, while all around Trastevere a large wooden fence was built, manned by guards who had the order to shoot on sight anyone who tried to leave. The pestilence lasted nine months, at the end of which the number of dead in the city was more than 15.000, on a population that at that time counted less than 100.000 inhabitants.

In 1837, then, a violent outbreak of cholera broke out in Rome. The Pope, to prevent the spread, banned all celebrations for the Roman Carnival, but these measures of containment were useless. The epidemic exploded in the city, facilitated by the poor general hygiene, the weaknesses of the health organization and the backwardness of medical knowledge. At the end there were about 7,000 deaths just in the city of Rome.