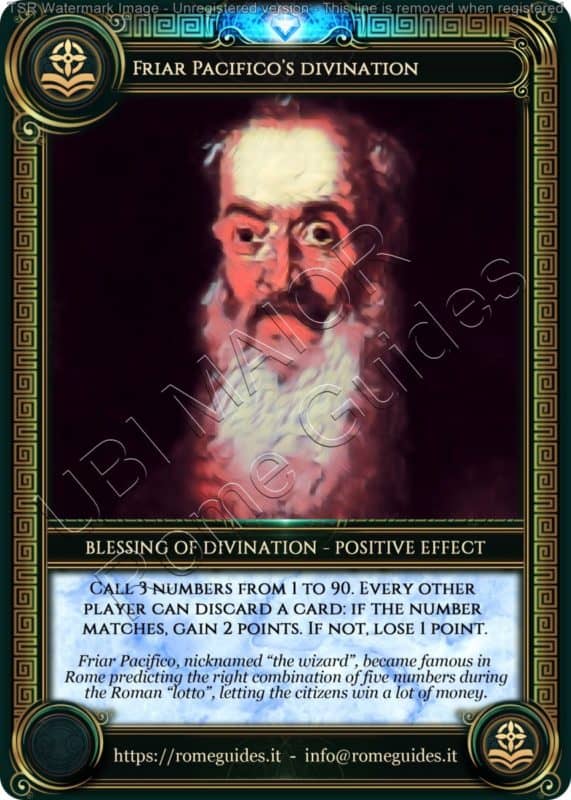 In Rome, until 1870, the Lotto game was managed by the Pope, who collected the bets of the players. Not all Pontiffs were in favor of this tradition, with Benedict XIII who decided to abolish it in 1727, even threatening excommunication for those who bet money in this game. Four years later, however, seeing a clear decrease in the papal finances, Pope Clement XII restored it.

However, there was a man who was able to cause a real financial disruption to the Papal States. Pacifico was a Capuchin friar, who lived in Rome between 1831 and 1846: according to the legend, the friar used to give his followers, during the confessions of sins, some combinations of lucky numbers to play at Lotto, sometimes even in exchange for small donations intended to replenish the cash boxes of the convent.

The Roman citizens believed that Friar Pacifico was a sort of seer, and most of those who trusted his predictions returned home with a monetary gain. The news of the “seer friar” also reached the ears of the Pontiff, who was very unhappy about these financial losses.

Pope Gregory XVI then decided to remove the inconvenient friar, because he was seriously worried about the money that the Vatican had to pay out because of the numerous predictions made by the friar. The followers tried to prevent the removal of Friar Pacifico in every way, but the Pope was irremovable.

At this point the friar, moved by the affection he received from the people, decided to provide a last gift to the citizens of Rome by giving them for the last time a series of lucky numbers. Not having however the chance to formulate an explicit prediction, since it would have gone against the will of the Pope, he inserted his prediction in a sibylline riddle, containing the numbers 66, 70, 16, 60 and 6.

The numbers were drawn and revealed to be winning: the Pope had to pay out a total of about 300,000 scudi to the players who relied on Friar Pacifico’s numbers. Before abandoning Rome, the friar had taken his revenge!