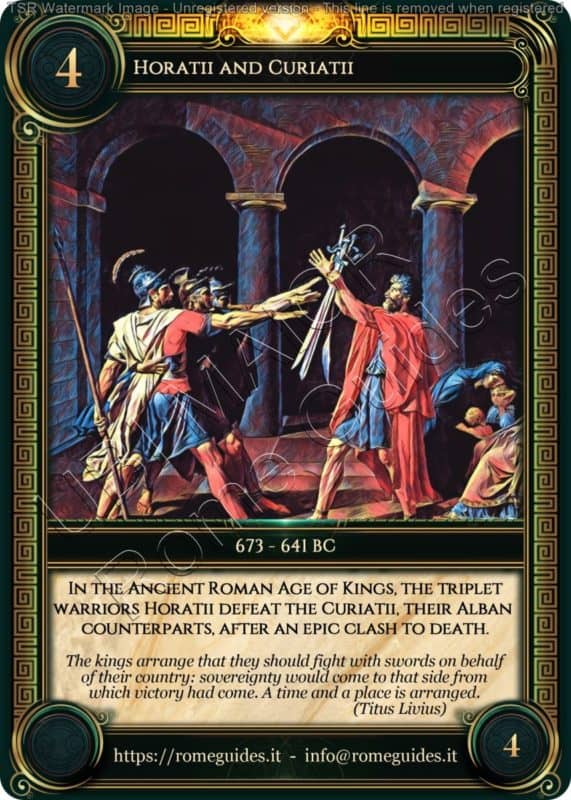 Under the reign of the third king of Rome Tullus Hostilius (673-641 BC), who had a particularly bellicose nature, broke out a war between the cities of Rome and Alba Longa.

To prevent the two populations from exterminating each other, the two kings sat at a table and decreed that the result of the war would have been determined by a duel between two pairs of three brothers: the three Horatii brothers fought for Rome, while the champions of Albalonga were the three Curiatii brothers. Whoever was able to win would have granted their faction the conquest of the enemy city.

The dispute seemed initially unfavorable to the Romans: two of the Horatii brothers died after a few minutes under the blows of the Curiatii, and the third Horace found himself facing three opponents alone. At that point, he invented an expedient: being a fast runner, he started to escape running towards Rome, and ran so long and so vigorously that the pursuers spread out among them, being unable to fight in a group.

At that point, turning around, he engaged the first of the Curiatii in a duel with him and killed him with his sword. He waited for the second enemy, challenged him to a duel and stabbed him to death. Defeated also the third opponent in a duel one versus one, Horace ran to Rome to announce the victory.

Back home, however, Horace had a nasty surprise. He discovered that his sister had been the secret lover of one of his opponents, and that she was now in mourning because of the death of her beloved. Horace, who saw in this behavior a deep lack of respect for his courage and for the honor of Rome, had no qualms and killed her.

Because of this gesture, he was taken to court and sentenced to death. His father, at that point, turned to the Roman citizens (the “plebs“) to overturn the judgment through a popular demonstration. The Roman people rose up against the decision to kill the hero who had given Rome the victory, and the judge overturned his verdict, saving the life of the young warrior: it was the first “plebiscite” in history.